Zelda Wiki
Register
Don't have an account?
Sign In
Advertisement
in: Lakes, Locations, Locations in Oracle of Seasons
English 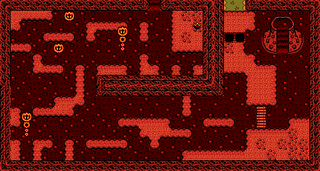 Lava Lake is a hostile region on the southeastern edge of Subrosia in Oracle of Seasons.[1] A single Bomb Flower blooms out of season in this area,[2] presumably due to its exceptionally hot climate.

The lake's basin is filled with lava flowing from a volcano to the northeast, and from the Great Furnace to the north. Near the lake's only entrance, a path of higher ground leads across a bridge to the south edge of the lake. Further inwards, only narrow patches of land criss-cross the lava. Podoboo Towers inhabit the inner lake. These are the only above-ground enemies in all of Subrosia.

A right-angled escarpment juts out from the north side, forming a backwards "L" shape in the center of the lake. A dead end is thus formed in the crook of the rocky "L." In this dead end, against the western cliff face, a singular Bomb Flower blooms on a wider patch of land.

Link needs the Bomb Flower at Lava Lake in order to blast open the Tower of Autumn at the Temple of Seasons. The Bomb Flower can be seen (from overhead) immediately upon entering the lake, as the entrance is just on the other side of the cliff. In order to reach it, however, Link must go all the way around the escarpment. Using Roc's Feather, he traverses the lake by jumping from one patch of high ground to the next, until he reaches the wider patc where the Bomb Flower grows. He then pulls it up the with the Power Bracelet and brings it back to the Temple of Seasons. With the entrance to the Tower of Autumn cleared, the young hero is able to obtain the power of autumn for his Rod of Seasons, and thus access Unicorn's Cave.

In a Linked Game, Link can learn the Plen Secret at Lava Lake and obtain the Spin Ring for relaying it. Once Link obtains the power of autumn, a gold-robed Subrosian appears next to where the Bomb Flower grew.[3] While travelling to Labrynna, the Subrosian had received help from Mayor Plen. He wishes to thank the mayor, but is too embarrassed to do it himself. He asks Link to relay a secret to Plen.[4] Upon doing so, Mayor Plen rewards the hero with a Magic Ring,[5] which becomes the Spin Ring upon Vasu's appraisal.[3]