Not to be confused with Laruta, a character in Breath of the Wild. 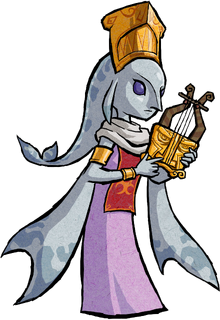 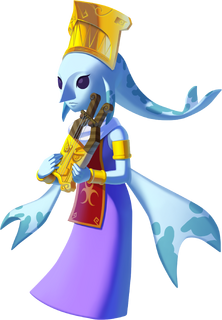 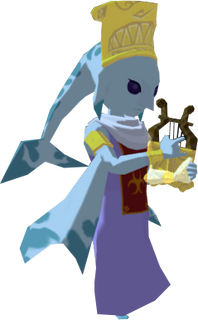 Laruto is the former Sage of Earth in The Wind Waker.[4] She is a Zora, the only one of her race to appear in The Wind Waker. She was born in Zora's Domain,[5] before Hyrule flooded. She was killed by Ganondorf after he managed to circumvent the seal of the Goddesses and reached the surface of the ocean.[6][7] After her death, her spirit remained in the Earth Temple until she was replaced by her descendant Medli.

Laruto had served as the Sage of Earth, praying that the power to repel evil would remain within the Master Sword. After Ganondorf killed her, her spirit remained in the Earth Temple, waiting for a successor.[8] When Link visits the temple, Laruto appears before him, requesting that he find the new sage.[9] Laruto gives Link a couple of hints regarding how he can recognize the new sage and teaches him the Earth God's Lyric,[10] the song that will awaken the new sage.[11]

Laruto's last appearance is when Link defeats Jalhalla. When Medli plays the Earth God's Lyric, Laruto appears next to her and plays along. She disappears again when the Master Sword has regained (part of) its power, finally freeing her from her obligations.

The name Laruto could be a combination of the word lament, which is "a song of passionate sorrow or grief", and Ruto, another Zora sage. The name Laruto seems to be reference to the name Ruto, which belonged to the Zora princess in Ocarina of Time, who was also a sage.