This article is about the recurring item. For the item from The Minish Cap, see Flame Lantern.

The Lantern, also known as the Lamp, is a recurring item in the Legend of Zelda series. This item typically serves the purpose of illuminating dark areas and lighting unlit Torches at the expense of steady consumption of its energy source until it is completely depleted, at which point the lantern will cease to function. In games where the lantern is not featured, Candles, Fire Arrows, Din's Fire, the Fire Rod, the Flame Lantern, Ember Seeds, or portable Torches replace its use.

The Lamp is potentially the first item Link can receive. It can be found inside a chest in Link's House. However, should he fail to collect the Lamp from the chest in his house, it can be found inside Hyrule Castle, either in the castle's secret entrance or in Princess Zelda's cell. After her rescue from captivity, Princess Zelda does not allow Link to enter the Secret Passage without having the Lamp. The Lamp is powered by the Magic Meter when used to light torches, though it automatically lights up in dark areas without the use of magic. While useless for attacking, the Lamp is invaluable when it comes to lighting torches as it uses very little magic if only one flame is used.

Unlike in the original version, the fire produced by the Lamp from the GBA remake of A Link to the Past can actually be used to damage enemies, and can do so rapidly. It hits enemies twice normally, but does not burn them like the Fire Rod does. It also can be used to burn single patches of grass or bushes.

Poes, Big Poes, the Poe Sisters, and Dampé's Ghost all wield Lanterns, that are used to contain their soul and attack Link. Instead of a Lantern, Link uses Deku Sticks (as a child), Din's Fire, and Arrows/Fire Arrows to light Torches, ignite flammable objects, and enemies vulnerable to fire.

One of the Poes found in Explorer's Crypt utilizes a lantern when fighting Link by creating a stream of fire that lingers on the battlefield.

Lanterns can be found on various Item Podiums. They are primarily used to shed light on dark surroundings, making navigation easier. Lanterns can also be used to light torches and burn obstacles such as bushes and tree stumps. Force Gems will appear after the obstacle is burnt. They are the only items in the game that cannot be upgraded to Level 2 by a Great Fairy.

The Lantern is given to Link by Coro as a gift to Link when they first meet. Coro thinks if he gives customers a free lantern, they will always come back for more oil. Lantern Oil can be purchased or found in certain areas. The lantern is vital for visibility in dark passageways, burning cobwebs, igniting torches to open doors, or summoning chests. The lantern is also used to disperse Poison Fog. It can also be used to keep the Poison Mites in Arbiter's Grounds from jumping on to Link. If Link lights the Lantern in the Bomb Shop, Barnes will turn on the sprinklers to douse the flames.

The Lantern (Called Lamp In-game) is found in the secret passage leading to the Sanctuary. It can light torches, making it especially useful in the Dark Palace. Later in the game, it can be replaced by the Super Lamp after beating the advanced level of the Treacherous Tower. 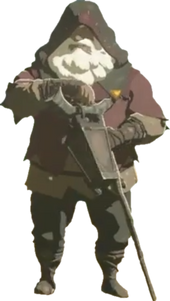 In Hateno Village and Deep Akkala there are stationary Blue Flame lanterns set up to help carry the flame from the Ancient Furnace to the Furnace that power the Hateno Ancient Tech Lab and Akkala Ancient Tech Lab. The lanterns can be lit at any point though the Furnaces can only be lit during the Quest "Locked Mementos" and Side Quest "Robbie's Research" respectively. However lighting them beforehand can save time and make both quests alot easier.

Portable Torches are used by Link instead of lanterns though they must be lit by a source of fire. Wooden weapons can also function as makeshift torches but will burn up while Torches are designed to carry a flame without burning up. Rain can still put out lit torches, though Blue Flame lanterns protect the flame from rainfall. A lit torch can also warm Link's body temperature in cold climates. However travelers often carry lanterns that they light up when travelling at night. The Old Man carries a lantern hanging from his walking stick (as he is actually a ghost this may be a reference to lanterns carried by Poes and Dampé's Ghost). Additionally their are Fire Arrows, Fire Rods, Meteor Rods, Flameblades, Great Flameblades, and Flamespears that can light thinngs on fire.

The Lantern from Twilight Princess is featured as a sticker. Its sticker gives a +7 bonus to flame resistance, and can only be applied to Link, Toon Link, Zelda, and Ganondorf.

The Lantern appears as one of the Item Cards found on the Twilight Map from the Twilight Princess Pack DLC. Its Item Card can be used on the search screen to light torches to reveal hidden enemies. The Big Poe's Lantern wielded by Big Poes, Hylian Ghosts, and Spirit of the Caves appear as their Silver Material drops and Icy Big Poe's Talisman (Snowman-shaped lanterns) wielded by Icy Big Poe appear as their Silver Material drop.

Retrieved from "https://zelda.fandom.com/wiki/Lantern?oldid=542422"
Community content is available under CC-BY-SA unless otherwise noted.