Zelda Wiki
Register
Don't have an account?
Sign In
Advertisement
in: Items, Lanterns, Items in A Link to the Past,
and 7 more 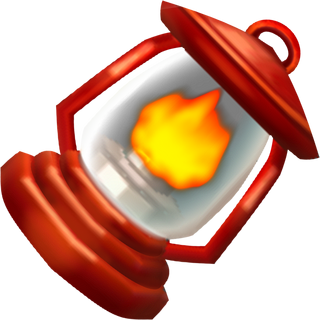 A Link to the Past (Ishinomori)
Ancient Stone Tablets
The Faces of Evil
The Wand of Gamelon
Super Smash Bros. Brawl

Candle
The Lantern,(ALttP | TP)[1][citation needed] also known as the Lamp,(FSA | ALBW)[2][3] is a recurring Item in The Legend of Zelda series.[name reference needed]

In A Link to the Past, the Lantern is found inside a Treasure Chest either inside Link's House when he wakes up, or in Hyrule Castle if he does not open the chest in his house. Link can use the Lantern to light up Torches. Using it consumes Magic Power. The Lantern radiates a small amount of light in dark rooms, even when not equipped, allowing Link to see a small distance in front of him before lighting Torches. The Lantern deals damage in the Game Boy Advance version of this game.

In Four Swords Adventures, it is called Lamp. It is not a part of the Links' permanent inventory. The Lamp instead appears in various stages, whether it be a dark dungeon, or in the face of a torch puzzle. The Lamp is necessary to defeat the Big Poe in both of its appearances.

The Lantern in The Minish Cap is called the Flame Lantern, and is obtained in the Temple of Droplets. It can be used to light up dark areas, light Candlesticks, and melt Blocks of Ice.

In Twilight Princess, Link can obtain the Lantern from Coro in Faron Woods. Coro gives him the Lantern as part of a business plan to boost sales of his main product: Lantern Oil. Unlike previous incarnations, the Lantern can be hung from Link's belt while lit, allowing the hero full use of his hands while still providing him a source of light. If Link brandishes the Lantern while there are Poison Mites nearby, the flame will keep the vermin at bay, preventing them from impeding his progress. The Lantern is necessary to burn spider webs blocking Link's path. It is also required to complete many Lantern Caverns that are scattered around Hyrule.

Unlike previous games, where Lanterns used Magic Power to fuel themselves, the Lantern in Twilight Princess is fueled by Lantern Oil, which can be purchased at various shops or found in dungeons. Link can also use yellow Chu Jelly obtained from yellow Chuchus. Link can store extra fuel for his Lantern in empty Bottles.

In Twilight Princess HD, the Ghost Lantern also appears. When equipped, it lights up if a Poe is in the area.

In A Link Between Worlds, the Lamp can be found inside a Treasure Chest underneath the Sanctuary. As long as Link has it equipped, it will dimly light a circular area around him. Enemies such as Ghinis disappear when in use. By pressing the button to which it is equipped, Link can swing the Lamp, which can be used to light torches, melt ice, or damage enemies.[4] It can also instantly melt enemies made from ice.

By completing the advanced course of the Treacherous Tower in Lorule once, the Devilish Girl will replace Link's Lamp with the Super Lamp. This upgrade illuminates areas more brightly and deals eight times more damage than before.

In Ancient Stone Tablets, Aginah gives the Hero of Light the Big Bag, which contains the Lantern alongside other items. The Lantern can be used to light up torches. Using it consumes Magic Power.

In the A Link to the Past comic by Shotaro Ishinomori, Link finds a Lantern inside Hyrule Castle after he rescues Princess Zelda from her prison. He then uses it while passing through the Sewer Passageway to reach the nearby Sanctuary.

In The Faces of Evil and The Wand of Gamelon, Lanterns are used to light dark areas for a brief period of time and require Lantern Oil in order to be used. Three types of Lanterns exist in these games.

A third upgrade of the Lantern also appears in both games, which does not use any Lantern Oil and makes invisible enemies visible in the games' final stages. In The Faces of Evil, the third Lantern is the Lantern of Vision, and is received from Gwonam after finding his house in the Hermit Flat. In The Wand of Gamelon, it is the Fairy Lantern, and is received from Myra in Nokani Forest. The Fairy Lantern also has the ability to "penetrate the dark around Ganon," which allows Zelda to get close to him with its light.

In Super Smash Bros. Brawl, the Lantern from Twilight Princess appears as a Sticker.

In Hyrule Warriors, the Lantern appears as an Item Card in Adventure Mode in the Twilight Map. It is used to lights torches, revealing enemies in that square.

Lanterns in The Legend of Zelda series
Community content is available under GNU Free Documentation License unless otherwise noted.
Advertisement