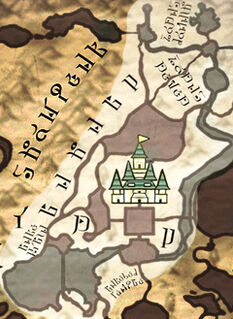 The Lanayru Province (pronounced /ləˈneɪ.ruː/ lə-NAY-roo)[1] is a recurring province of the Hyrule overworld in The Legend of Zelda series.[2][3] The province is named after its original protector from the Era of the Goddess Hylia, the great Lightning Dragon known as Lanayru. It is later protected by the Light Spirit of the same name in the Era of Twilight.[4][5]

At one point, the Lanayru Province had a flourishing and abundant climate, as well as a vast ocean.[6] However, by the Sky Era, it had turned into an arid desert.[7] By the Era of Twilight, the province once again became a lush state that is notably home to Lake Hylia, and houses the capital of Hyrule as well as its castle.

In Twilight Princess, the Lanayru Province is situated at the furthest northern part of Hyrule and takes up a large majority of the kingdom, housing the capital at the center. It is located to the north of the Faron Province, east of the Desert Province, southeast of the Peak Province and west of the Eldin Province.

The Lanayru Province is the third province visited during Link's journey. Like the Faron and Eldin Provinces before it, he finds the entire province covered in Twilight. The young hero travels to Hyrule Castle Town and then to Lake Hylia, where he finds the lake dry. There he unfreezes Zora's Domain and returns the water flow to Zora's River, thus refilling Lake Hylia. Having done so, Link then visits the Spring of the Spirit Lanayru to collect the sixteen Tears of Light in order to return light to the province. Later on in the game, after Link takes the dying Ralis to Kakariko Village and receives the Zora Armor from Rutela, he dives to the bottom of Lake Hylia and enters the Lakebed Temple, obtaining the third and last Fused Shadow upon the defeat of Morpheel.

In Skyward Sword, the Lanayru Province is located to the west of the Faron Province and southwest of the Eldin Province. In the Era of the Goddess Hylia and the Sky Era, the Lanayru Province is protected by a great Thunder Dragon, Lanayru, who was ordered to protect the province by the goddess Hylia.[8] It is the home of an ancient race of advanced robots whose origins are unknown. Over the course of several hundred years, it was stripped bare of its natural greenery, beauty, resources, and even all good life due to a rapid change in the area's climate, transforming most of the province into a barren desert that would come to be known as the Lanayru Desert.[7][9] In the present, its former protector Lanayru had disappeared from the deserted province and the Ancient Robots have long since died out, with their remains scattered everywhere. All of its once formerly functioning buildings have fallen into disuse, many filling with sand and monsters, and all use of technology and electricity has completely declined. The region has since become home to an array of hostile creatures that thrive in its harsh conditions. The only thing still active from its once prosperous era of advancement are the many Timeshift Stones scattered throughout the province, which allow one to see a limited section of the land in its former lush and green days. The western section of the province once lead into an ocean, but that too fell victim to severe climate change and became the Lanayru Sand Sea.[6]

Link returns to the Lanayru Desert in order to complete Nayru's Silent Realm. He receives the Clawshots as a gift upon its completion, which grant him access into the Lanayru Caves and, consequently, into the Lanayru Sand Sea. Here, Link alternates between the present and the past with Timeshift Stones in order to cross the barren sea and locate the Sandship, which houses Nayru's Flame. With Skipper's help, Link completes the mini-dungeon, the Pirate Stronghold, and finds clues as to the location of the Sandship. After defeating the temple's boss, Tentalus, Link proceeds with his adventure for the final Sacred Flame.

Link returns to the province a third time to obtain a segment of the "Song of the Hero". Link manages to gain access to the Lanayru Gorge, where the dragon Lanayru resides. However, all he finds are his skeletal remains. Link then transports a Timeshift Stone from a mining facility to the power pedestal that amplifies the stone's effect on time, thus reviving Lanayru. However, although revived, Lanayru suffers from an illness and cannot teach him his part. Link heals him by relocating the Life Tree Seedling to the Sealed Temple in the past, and obtains the Life Tree Fruit in the present.[10] After recovering, Lanayru teaches Link his part of the song, and promises Link that he will repay him for saving his life.[11] Should Link return, Lanayru will allow him to participate in his Lighting Round mini-game, where Link will be able to re-battle past opponents for the chance to win the Hylian Shield.

The province incorporates the name of Nayru.