Zelda Wiki
Register
Don't have an account?
Sign In
Advertisement
in: Locations in Skyward Sword, Dungeons, Lanayru Province,
and 2 more 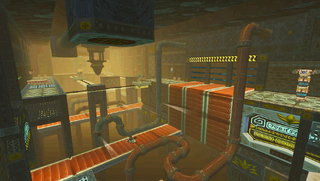 Lanayru Mining Facility is the third Dungeon in Skyward Sword.[1] It seems to be a refinery or a factory of some kind for Timeshift Stones.

Entrance to the Facility

The Dungeon is located within Lanayru Desert, at first sunken beneath the large pool of Sand in the east frontier of the ancient Temple of Time. It was the main industrial complex of an unnamed civilization or corporation that had died out. The Dungeon is full of Sand that has built up over time.

Link initially proceeds to the location of the Temple of Time, only to discover that the entrance is blocked. He then learns from an Ancient Robot that the Lanayru Mining Facility and the Temple of Time are connected underground. To unveil the Facility, Link proceeds to activate three power nodes placed strategically in the areas close to its entrance. Two power nodes are located inside caches, and one is hidden behind a bombable statue. In all cases, the nodes can only be activated when a Timeshift Stone is activated nearby, and to do so Link stabs at the center of each of them so he can proceed to rotate the pointer up to a certain angle. Each pointer has a symbol: a Lightning bolt, a Water droplet, and a Fire. When all three nodes are activated, Link goes to the Power Generator that is in front of the Lanayru Mining Facility's resting area, and proceeds to input its three pointers in an order that is indicated by the order of placement of the symbols, which in turn is based on the position of the original power nodes (this can be seen on the map, where the three symbols are shown). The Facility is then revealed, and Link proceeds to enter.

Compared to previous Dungeons, Lanayru Mining Facility shows a significantly more advanced technology, such as artificial lights and luminous platforms and stairs. It also contains a large number of Timeshift Stones that were mined from the earth, as well as many ruined and disused systems that come to life when the Timeshift Stones are activated.

Inside, the Sand proves as difficult to navigate as outside, requiring plenty of Stamina to dash across the various Sand-filled rooms. Also found inside the Lanayru Mining Facility's walls are a number of minecarts and conveyor systems that have fallen into disrepair. The use of Timeshift Stones allow Link to restore these systems and help him trigger Switches in order to further proceed into the Dungeon. However, Link must evade the rugged piles of unrefined minerals and electric barriers as he navigates the conveyor belts. Stamina Fruits are occasionally dropped, allowing Link to continue running across the belts. The past also contains several mechanical sentries, powered by ancient and relatively unknown technology, which Link must defeat in order to proceed.

Large piles of softer Sand frequently appears alongside the dangerous Sinksand, and although they rarely impede movement, one of them blocking a door, the piles frequently hide Switches, Treasures, or Enemies. Link must use the Gust Bellows to blow away the Sand and reveal what it hides. Link will have to continue activating Timeshift Stones and use the Gust Bellows as he travels deeper into the Dungeon. Several mechanical platforms must be moved by using the Gust Bellows, and some Switches are triggered in this fashion as well. Timeshift Stones on moving minecarts have to be used at some points, meaning the young hero must move quickly and precisely to ensure that tasks they need to do in the small past area are completed.

Interestingly, this Dungeon doesn't have a Sub-Boss, and the Boss doesn't directly guard any quest reward other than a Heart Container. Instead, after Link defeats it, he crosses a railroad that takes him to a scene at the Temple of Time where he has to protect Zelda and Impa from Ghirahim's reaches, and receives from his childhood friend the Goddess's Harp.