For a similar desert in The Legend of Zelda series, see Gerudo Desert. 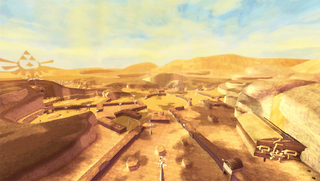 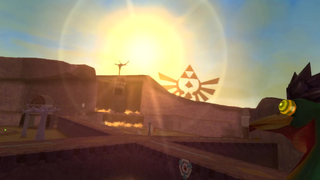 The Lanayru Desert, along with the rest of the Lanayru Province, was once a vast green landscape, inhabited by a technologically advanced civilization which used Robots to perform various mining tasks in the area. However, climate change slowly transformed the once prosperous region into a desert over several centuries,[2] leaving all of the region's natural resources depleted and the Robots eventually broken down as well; all that remains of the once green land is a vast Desert with many hazards, such as Sinksand.[3] Along with the decay of the green land, a Sand Sea is now located where the great sea once was.

Link first visits the Desert while in search of his childhood friend Zelda after receiving the Amber Tablet from the Earth Temple upon Eldin Volcano. The Amber Tablet, upon being placed inside the Statue of the Goddess on Skyloft, reveals a new opening in the clouds leading to Lanayru Desert. After descending, Link finds himself to be situated in an area known as Lanayru Mine.[2] The Mine itself was one of the notable locations where the Ancient Robots were mining for Timeshift Stones, which serve as their primary source of power.

After Link activates one the Desert's many Timeshift Stones, the area, the Ancient Robots, and objects all located within the vicinity of the Stone all replenish and reactivate to life.[4] After traveling through the Mine, Link finds himself in Lanayru Desert. He proceeds to explore the Desert and finds an Ancient Robot under attack from a technologically advanced variety of Bokoblin known as the Technoblin. After Link rescues the Robot, it thanks the young hero and upgrades his Beetle into a Hook Beetle so that it can now pick up and drop various objects. The Robot also reveals that the Beetle was manufactured by the same civilization that produced the Robots.[5] Using his upgraded Beetle, the young hero travels further across the Desert, and reaches the ancient Temple of Time where Zelda is said to be located. Unfortunately, Link finds that the entrance to the Temple is blocked by rubble. Gorko the Goron tells him that the entrance's collapse was caused by a recent explosion there.[6] Upon saving it from the local Technoblins, another Robot alters Link's Map to show the region based on how it appeared in the past, revealing that there is another entrance to the Temple of Time located deep inside Lanayru Mining Facility. The modified map also reveals submerged paths over the quicksand in the area, allowing Link to travel around the Desert with ease.[7] To access the mining facility, Link must activate the three power nodes, which energize the Power Generator that can raise the mining facility's entrance from below the ground. Upon doing so, it rises out of the sand and the young hero ventures within, obtaining the Gust Bellows and fighting the facility's boss, Moldarach, a large, fully grown Aracha. After defeating Moldarach, Link enters the Temple of Time, discovering Zelda and Impa at one of the two surviving Gates of Time. However, before Link can reunite with Zelda, Ghirahim breaks through the rubble at the entrance. He engages in battle with Impa while Zelda gives Link the Goddess's Harp.[8] With Link's help, Zelda and Impa escape through the gate, destroying it behind them.

Later in the game, Link returns to Lanayru Desert to search for Nayru's Flame. While in search of it, the young hero is tasked with conquering Nayru's Silent Realm Trial and receives the Clawshots for completing it. Using the newly acquired item, Link travels through the Lanayru Caves to Lanayru Sand Sea where he finds and revives an Ancient Robot by the name of Skipper. Skipper says that he was the captain of the Sandship, a ship that protected Nayru's Sacred Flame, until a gang of pirates led by LD-002G Scervo captured the ship because they wanted to possess the Sacred Flame. Link and Skipper travel by boat across Lanayru Sand Sea, searching for clues to the whereabouts of the Sandship. After traveling to Skipper's Retreat, Lanayru Shipyard and the Pirate Stronghold, they finally track down the fabled ship using the Goddess Sword's Dowsing ability and board the vessel.

Lanayru Desert could be considered the most hostile and deadly location in the game due to the large amount of quicksand, gorges and the plentiful numbers of fast-moving, electrical enemies that can cause considerable damage to Link and temporarily paralyze him. It is scattered with Timeshift Stones, objects that shift a small portion of the Desert into a state of time from many years ago. With Lanayru Mining Facility, Sandship and Pirate Stronghold, it is home to two of the game's major dungeons and a mini-dungeon, all of which require Link to manipulate the nearby Timeshift Stones, so that he can render that specific room into a past state. In the present day, the Desert's robotic workers, the Ancient Robots, are lifeless and the Thunder Dragon Lanayru is missing. It is for this reason that time shifts to revert small sections of the Desert into a past state are required. This causes the enemies that appear in the Desert's present to cease to exist; however, the time shift also reanimates the nearby remains of any enemies. The Temple of Time is found here with a Gate of Time, which is soon destroyed by Impa. Like the other three regions of Skyloft, Faron Woods and Eldin Volcano, it is home to one of the four Silent Realms; in this case, Nayru's Silent Realm. After completing this trial, Link receives the Clawshots, one of the Goddess's sacred gifts.

Tumbleweeds are very common throughout the main portion of the present-time Desert and can be used to upgrade items at the Scrap Shop in the Skyloft Bazaar. Bugs like Lanayru Ants, Gerudo Dragonflies, and Sand Cicadas can be found here and captured.