This article is about the Light Spirit. For the province of the same name, see Lanayru Province.

"Link, hero chosen by the goddesses...Go to the princess locked away in the castle. That princess holds the key that can unlock you from your shadow form..."
— Lanayru

Lanayru is a character from The Legend of Zelda: Twilight Princess. It is the fourth and final Light Spirit that Link encounters. It resides in Lanayru Spring, where its power was stolen by Shadow Beasts. It appears to be a giant water snake. Its name may also be a reference to Nayru, the goddess of wisdom.

After Link meets the broken spirit, which appears to be a small cloud, it will provide the Vessel of Light to carry the Tears of Light.

After Link kills all the Shadow Insects in Lanayru Province, Lanayru is restored, appearing in the form of a celestial serpent. The spirit gives Link an explanation about the creation of Hyrule, the Triforce, the Hyrulean Civil War and the true nature of the Fused Shadows, emphasizing how dangerous and powerful they are. Lanayru uses vivid imagery to prove its point, and the force of its vision makes Link fall to his knees.

After Link gathers the last Fused Shadow, he is transported to the Lanayru Spring. When he turns to leave, he realizes that Zant had appeared behind him. Lanayru, enraged that Zant had come to its spring, tries to drive Zant away with its light, but Zant overpowers it and knocks its back into the spring. Zant then steals its power, spreading twilight over Lanayru Province once more. Link, transformed into his Wolf Form in the twilight, attempts to attack Zant, ramming his head into the sphere of magic Zant was conjuring, which became the Shadow Crystal, sealing him in his wolf form. When Midna protests, Zant taunts her about her willingness to save the Light World. Zant then removes the twilight and allows the Light Spirit Lanayru to return. Midna is then exposed to, and nearly killed by, the spirit's light. Lanayru then uses its power to teleport Midna and Link to Hyrule Castle in order to seek out Princess Zelda, who is the only one who can supposedly save Midna from dying.

Lanayru and the other light spirits present Zelda with the Light Arrows during the final battle with Ganondorf. It also, along with the other spirits, Faron, Ordona, and Eldin, revives Midna and restores her to her original form.

It is likely that "Lanayru" derives from the name "Nayru", the goddess of wisdom. 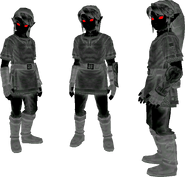 Lanayru in Twilight Princess HD
Add a photo to this gallery

Retrieved from "https://zelda.fandom.com/wiki/Lanayru_(Twilight_Princess)?oldid=493083"
Community content is available under CC-BY-SA unless otherwise noted.