This article is about the location in Breath of the Wild. For other uses, see Lanayru (Disambiguation). 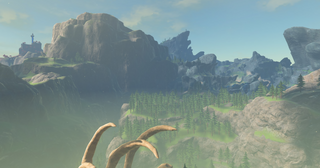 Lanayru is a recurring Region in The Legend of Zelda series.[1][name reference needed]

Lanayru is an eastern Region of the Hyrule, containing the Lanayru Great Spring, Lanayru Sea, Lanayru Wetlands, and Mount Lanayru. The Region is the primary source of Hyrule's freshwater and is home to the aquatic Zora people.[2] It is bordered by the Akkala, Eldin, Central Hyrule, and Necluda Regions.

The Lanayru Great Spring, located in the central part of Lanayru, consists of an elevated plateau and several noteworthy Water features. It holds areas such as Zora's Domain and East Reservoir Lake, the latter of which contains Divine Beast Vah Ruta. Numerous waterfalls dot the area and form rivers that flow into the Lanayru Wetlands, lending to an increased amount of Lizalfos.

The Lanayru Sea, located in the easternmost part of Lanayru, is a large body of Water adjacent to the steep, rocky cliff faces of Tal Tal Peak. It primarily contains Spool Bight along the region's coastline.

The Lanayru Wetlands are a relatively flat, western sub-Region bordering Central Hyrule. The shallow marshes have several islands connected by crude, makeshift bridges. The area holds the Goponga Village Ruins and is occupied by a fair amount of monsters.

Mount Lanayru is a notably tall, cold mountain in the southeastern part of Lanayru. It borders the Necluda Region and contains the Spring of Wisdom near its peak. At the peak of Mount Lanayru, Naydra can be found, taken over by Malice.

Shatterback Point is a cliff at the summit of Ploymus Mountain.