"Hey, buddy, have you heard? There's like a temple or something at the bottom of this lake. They put on such airs with all their rituals and fancy temple hoo-ha...Then they just disappear...And what's with putting that temple so deep that humans can't swim there?! I swear, those Zoras..."
— Fyer

) is the third dungeon in The Legend of Zelda: Twilight Princess. It is located at the bottom of Lake Hylia.

Prior to Link's entry, several Zoras can be seen swimming around outside the temple. They explain to Link that the Lakebed Temple was once called the 'Zora Temple'. Another Zora in Zora's Domain informs him that a few Zoras became trapped inside the temple when the monsters invaded it. They supposedly perished, as they are never seen in-game.

Lakebed Temple was once a place of worship for the Zora race, but at some point in time, monsters filled the cavern and it was forced to be abandoned. It is the location of the third Fused Shadow.

After delivering light back to Lanayru, Link uses the Zora Armor to venture down beneath Lake Hylia and blow the entrance open with a Water Bomb.

During the battle with Morpheel, Link pierces the evil eel's eye, blinding it. Morpheel rams into the side of the chamber, opening a huge hole in the wall that drains the chamber of all the water. Link and Midna get the last Fused Shadow upon its defeat. 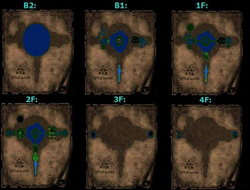 Lakebed Temple is accessed through the use of a Water Bomb and the Iron Boots. The dungeon item is the Clawshot, the mini-boss is a giant amphibian called the Deku Toad, and the boss is Morpheel. The temple's puzzle revolves around manipulating the direction of a large staircase in a central tower, and using this staircase to direct flows of water that must be turned on to open new areas. Most rooms in the temple appear cave-like, suggesting it has been naturally carved out of the lakebed as opposed to being a completely man-made dungeon.

Due to their similar structure and location, some believe that the Lakebed Temple is a redesigned version of the Water Temple from The Legend of Zelda: Ocarina of Time.

Retrieved from "https://zelda.fandom.com/wiki/Lakebed_Temple?oldid=455460"
Community content is available under CC-BY-SA unless otherwise noted.