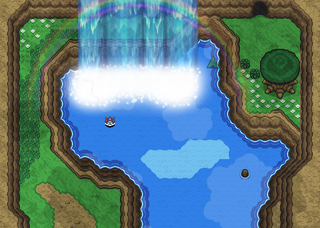 Lake Hylia is a stage in Four Swords Adventures.[1] It is the first stage in the Whereabouts of the Wind level.

After being flung away by the twister created by Vaati in the Four Sword Sanctuary, the Links find themselves in a small field near Lake Hylia, stirred awake by the voice of Kaepora Gaebora. The owl explains to them that before they face Vaati, they must find and rescue Princess Zelda and the six Maidens first; by doing so, they will surely find Vaati. He tells them that their Four Sword at present is weak, but can have its power restored by collecting and infusing it with Force Gems. He bids them good luck, and says they will meet again soon.

Unlike in the other games where Lake Hylia is a singular lake, Lake Hylia appears as a series of small lakes connected by rivers. It is located in the eastern portion of Hyrule, and consists of mainly grassy areas, caves, rivers, and mountainside waterfalls where rainbows form in the light of the sun. As the first stage in the game, Lake Hylia features basic enemies and obstacles that serves to introduce controls, maneuvering and basic team-coordination skills. Close to the field where the Links awaken, they find a house belonging to the Formation Old-Timer who spends his days teaching his grandchildren Battle Formations, and offers to give the Links a quick lesson as well.

Among the enemies encountered in this stage include resident Octoroks and Zoras, as well as Shadow Link, who had locked an old woman inside her house.[2] Also encountered are enemy Soldiers, who are under the control of Vaati and patrol the grounds close to the lake's bridge. Underneath this bridge, the Links find Tingle trapped beneath a large rock. Tingle thanks them for saving him, and explains that he is on the look-out for Force Gems as well, believing that he will become a Fairy if he collects enough. He believes that the Links must also be looking for Force Gems for the same reason, and insists that they all share the Force Gems they find equally. From there on, Tingle will appear at certain points throughout the game hoping to take large Force Gems for himself, which the Links must race against him for.

After swimming through the lake's rivers and maneuvering through its caves, the Links eventually arrive to the wooden bridge, where they fight the Soldiers patrolling the area. They then shortly fight their commander, a Chief Soldier, at the lakeside's end. At the very end of the stage, the Links find dark barriers blocking the entrance to the next stage, the Cave of No Return, which Kaepora Gaebora explains can only be dispelled with the powered up Four Sword.

Lakes in The Legend of Zelda series
Community content is available under GNU Free Documentation License unless otherwise noted.
Advertisement