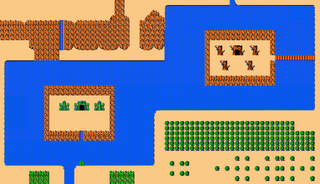 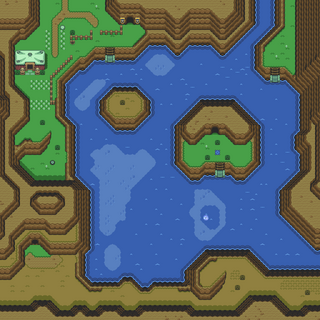 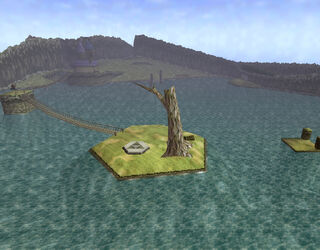 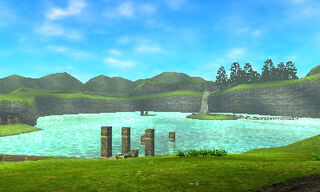 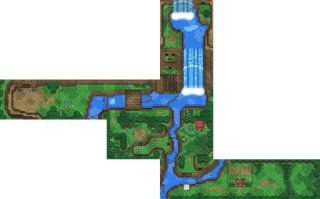 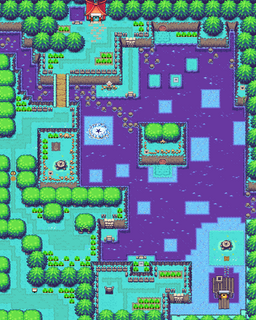 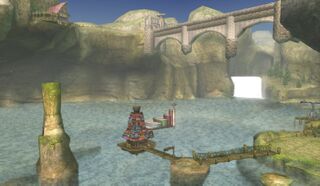 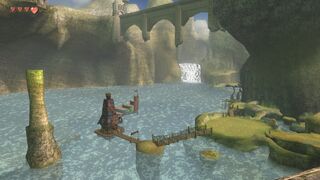 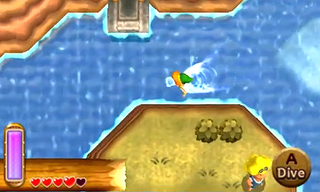 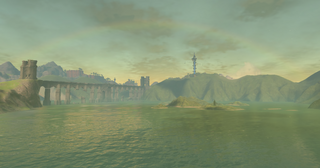 BS The Legend of Zelda
Hyrule Warriors
Cadence of Hyrule

In A Link to the Past, Lake Hylia is located in southeast Hyrule and has a network of small caves coming off it. The lake itself is fed from Zora's River, which in turn flows from Death Mountain.

In both its Light and Dark World incarnations, the lake is filled with Zora who will attack Link upon sight. In the center of the lake is an island featuring the Pond of Happiness that is inhabited by Venus, the Queen of Fairies, who will upgrade Link's ability to carry Bombs or arrows in exchange for Rupees. Outside the pond is a warp tile that grants access to the Ice Palace located in the Dark World's Ice Lake, which has several ice platforms across the lake.

In addition, the Ice Rod item is found in the Ice Cave on the northeastern side of the lake, as well as the Golden Bee, a Bottled insect that can be unleashed to attack foes.

In Ocarina of Time, Lake Hylia is located in the southern region of Hyrule and is home to the sunken Water Temple, which is used by the Zoras to worship the water spirits.[6] The lake is made up of various islands, with the largest one bearing a lone tree as well as the pedestal that serves as the warp point for the "Serenade of Water." It is connected to Hyrule Field and has an underwater tunnel that serves as a shortcut to Zora's Domain, although it is blocked by ice once Link turns into an adult. All of the lake's water comes from Zora's Fountain, passing through Zora's River, then Gerudo Valley, and eventually reaching Lake Hylia.[7] As such, it is possible to reach the lake by floating down the river from Gerudo Valley. Also on the shore of Lake Hylia are two Scarecrows named Pierre and Bonooru, the latter of which helps Link obtain the Scarecrow's Song. Other notable features of Lake Hylia include the Lakeside Laboratory, where various experiments are conducted to discover the lake's mysteries, and the Fishing Pond, where Link can fish for an unlimited time for just 20 Rupees.[8][9]

Link first visits the lake as a child while looking for Princess Ruto, where he finds Ruto's Letter encased in a bottle at the bottom of the lake. Later, after the young hero turns into an adult by pulling the Master Sword from its pedestal, Link returns to find the lake almost drained of its rich waters. He discovers that the lake has been drained as a result of Morpha's curse. With the help of Princess Ruto, Link sinks to the bottom of Lake Hylia using the Iron Boots and the Zora Tunic to reach the Water Temple and defeat Morpha.[10] Once Ruto awakens as the Sage of Water, the lake is filled with water again, returning it to its normal state.[11] Furthermore, Link can stand on a stone tablet above the Water Temple's entrance and shoot an arrow at the sun as it rises to have the Fire Arrows appear on the small, lone island.[12]

In Four Swords Adventures, Lake Hylia is the first stage of Whereabouts of the Wind, the first level of the game. The Links land in this area after they are flung away from Hyrule Castle by Vaati's tornado, and are awakened by the voice of Kaepora Gaebora, who tells them that they must rescue Princess Zelda and the six Maidens. Lake Hylia differs from previous games as instead of a singular, large lake, it consists of a series of small lakes and rivers, as well as giant waterfalls and cave tunnels. It is here that the young heroes also meet Tingle for the first time, who is trapped under a stone beneath the lakeside's wooden bridge. The lake leads to a cave entrance, where four dark barriers must be broken with the Four Sword in order to yield passage to the Cave of No Return.

Lake Hylia is an area in The Minish Cap, located in eastern Hyrule. It connects to two other areas: Lon Lon Ranch to the west and Minish Woods to the south.

The water enters the Lake by a river from Veil Falls to the north. To the south is the Minish Woods and to the west is Lon Lon Ranch. Stockwell, the shop-owner from Hyrule Town, owns a house here where his dog Fifi lives alone. Moreover, Waveblade, one of the Blade Brothers, houses a tree, ready to teach Link sword techniques. David Jr. is also found here.

One of Lake Hylia's most notable features is the Temple of Droplets, a frozen Minish-sized temple which serves as the fourth Dungeon of the game. After Link completes the Fortress of Winds and receives the Ocarina of Wind, he warps to the Wind Crest located in Lake Hylia and speaks to the nearby Forest Picori, who compliments Link for finding him. Upon hearing that Link is seeking to enter the Temple of Droplets, the Minish tells him that only one Minish, Librari, was able to find a way into it and directs him to the Royal Hyrule Library in Hyrule Town where Librari lives in semi-retirement.[13][14] After speaking to the Minish at Lake Hylia, the Royal Hyrule Library opens to the public, allowing Link to enter and speak with Librari. The Minish located at Lake Hylia is also a possible target for Kinstone Fusion. If Link successfully fuses Kinstone Pieces with him, the vines covering a tree in the Western Wood will clear, allowing Link to enter the tree and obtain the Piece of Heart inside.[15]

In Twilight Princess, Lake Hylia is located on the west side of Hyrule and is part of the Lanayru Province. The lake is home to Lanayru's Spirit Spring, Fyer's Cannon Rides, and Falbi's Flight-by-Fowl. The Lakebed Temple rests at the bottom of the lake, where Zoras patrol the entrance to the temple due to it being a sacred place for their people.[16][17] Lake Hylia is again fed by Zora's River, which travels all the way from the throne room of Zora's Domain. The only ways to access Lake Hylia are by playing Falbi's Flight-by-Fowl game, playing Iza's Rapids Ride game, jumping down from outside the South Gate of Castle Town, or Warping there. Despite this, many of Hyrule's citizens come to Lake Hylia to send prayers to Lanayru.[18]

When Link first visits Lake Hylia, it is covered in Twilight and has been mostly drained due to Zora's Domain being frozen, which stopped the water from flowing into the lake.[19][20] After Link and Midna thaw Zora's Domain with the Molten Shard from Death Mountain, the water flow returns and fills up the lake, allowing the young hero to visit Lanayru at his Spring and obtain the Vessel of Light to collect the Tears of Light of the Lanayru Province. Collecting 15 Tears of Light will make the last Shadow Insect appear in the middle of the lake, which is actually an oversized monster known as Twilit Bloat. Twilit Bloat's defeat allows Link to collect the last Tear of Light, abolishing the Twilight and returning light to the province.

Later on in the game, Link must visit the lake once again to meet with Auru at the tower situated on the west side of the area. Auru hands Link a memo to give to Fyer so that the young hero will be able to reach Gerudo Desert and thus reach the Mirror Chamber.[21] When Link must visit the City in the Sky in search of a Mirror Shard, he must bring Fyer the broken Sky Cannon that is found beneath the Sanctuary in Kakariko Village. For a fee of 300 Rupees, Fyer will repair the Sky Cannon, allowing Link to visit the dungeon at any time from the Sky Cannon's new position at Lake Hylia.

Lake Hylia is also home to three Pieces of Heart as well as a mini-game hosted by Plumm known as the Fruit Pop Flight Challenge.

Lake Hylia appears in A Link Between Worlds, located southeast of Hyrule Castle. It features the House of Gales, the second dungeon in the game, on an island at its center, located where the Pond of Happiness was in A Link to the Past. Link cannot reach the dungeon until he has obtained the Flippers from Queen Oren of the Zoras, which she gives to him as thanks for returning her stolen Smooth Gem, and cannot enter it without renting the Tornado Rod from Ravio.

Lake Hylia's counterpart in Lorule is dubbed Lorule Lake, with a fiery maze at its center known as Turtle Rock serving as analogous to the House of Gales in Hyrule. Gaining access to the dungeon requires Link to come to the aid of three turtles that are trapped in various predicaments across the lake; doing so prompts their mother to thank him by allowing him a ride atop her back, which Link can use to reach the dungeon's entrance.

Lake Hylia also features a hidden cave that houses Mother Maiamai, a character who will upgrade any one item that Link has purchased from Ravio for every ten Lost Maiamais that the hero finds and returns to her.

Lake Hylia appears as a stage in Hyrule Warriors containing the "The Water Temple" Scenario in Legend Mode. It appears as part of Sheik and Impa's quest, separated into two halves: the northern half being Lake Hylia itself, and the southern half the Water Temple. Pieces of Zora's Domain in its frozen state appears in the Lake Hylia portion of the stage.

Lake Hylia is named after the goddess Hylia.[24]