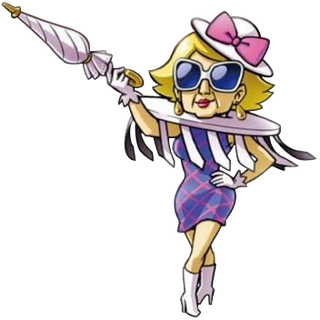 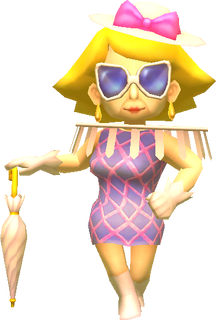 Lady Maud,[4] also known as The Lady,[5] is the primary antagonist in Tri Force Heroes.

Lady Maud is the witch of the Drablands,[6] which serves as her domain.[7] She is also Madame Couture's older sister,[8][9] and they are both part of a tribe who specialize in crafting magical clothes.[10] However, Lady Maud's skills were ignored, prompting her to move to the Drablands in order to find appreciation for her fashion sense with the creatures there.[11]According to Madame Couture, at one point, Lady Maud grew power-hungry with her abilities.[12] Although many in Hytopia adored their princess, Styla, Lady Maud did not, and despised her for her unbearably cute fashion sense.[6] One day she had sent the girl a beautifully wrapped gift,[13] however, this was only a trick, as opening it had cursed Styla to wear an irremovable, ugly jumpsuit.[14] However, according to the witch herself, she was simply attempting to make clothes that suited the princess better than her old ones.[15] Princess Styla isolated herself out of humiliation, and the townsfolk became afraid of the witch and dressed in ordinary clothing, out of fear that they would be cursed too.[16] In response, King Tuft issues a request for heroes to track down the witch as part of the Witch-Hunting Brigade. Link is recruited when he arrives in Hytopia. However, Lady Maud sincerely believed that her outfit was the perfect fashion.[17]

Throughout the Drablands, the Links find pieces of Lady Maud's Materials, including her Glasses, Collar, and eventually her Parasol. Madame Couture reveals that these Materials can be used to tailor the Lady's Ensemble, whose power can be used to lift the curse off of Styla without having to defeat the witch.[18] She implores that Link find the remaining Materials, and not just to save the princess, but also Lady Maud from herself.

The Links first encounter Lady Maud at her Lair in the Fortress of the Drablands. She suspects that Princess Styla has sent them to thank her for the Outfit, considering it as a generous gift.[19] She becomes offended, however, when they accuse her of cursing the princess and demand the Outfit be removed.[20][21] She sends her Pets to attack the Links, but they are all defeated. Lady Maud throws an angry fit and tells the Links to never come near her again, before teleporting away from the Fortress.

Lady Maud is later encountered again at the Sky Temple. She is very displeased to see that the Links have chased her all the way there. She becomes furious at their pestering and declares the temple as no place for unfashionable people. Lady Maud engages them in battle, but not before ridding them of their Items.[22] Despite this, the Links manage to defeat her after a long battle. Although she is angry, Lady Maud surrenders and says she is finished. She tells the Links to leave her alone, and teleports away from the Temple. With Lady Maud's defeat and the last of her Materials found, Link quickly tailors the Lady's Ensemble at Madame Couture's and lifts the curse from Styla. The creation of the outfit ensures that King Tuft will not have to press serious charges against Lady Maud.[23]

The Lady is fought as the Final Boss in the Sky Temple. Prior to the start of the fight, she will rid the Links of their Items picked up from the Level.[22]

During the first phase, The Lady will stand in the middle of a raised altar while a magical floor barrier circles around her. To pass the barrier, the Links must form a Totem and throw each other over. However as soon as the Links are on the other side of the barrier, The Lady will retaliate by throwing parasols at them. One Link must then be thrown onto The Lady's platform, however, she will push him away with her parasol. The thrown Link must be quick to attack her with the Sword before she can push him back. The Links can also wait until she is distracted while throwing parasols and throw one Link behind her. Eventually, after taking enough damage, The Lady will begin to throw a fit as her platform lowers and the barrier dissipates. She will then charge after the Links while waving her parasol wildly. One Link can lure her away while the other Links attack from behind. After several more hits, she will disappear and begin the next phase.

In the second phase, The Lady will transform into a new, more powerful outfit. The platform beneath her will lower, and she will send orbs of electrical energy at the Links. The color of the orb will target the Link whose tunic color it matches, but the orb will change color and bounce if it hits a Doppel. The Links play a form of Dead Man's Volley, where after hitting the orb, it will change color and fly to another Link. Eventually, the orb will turn yellow and fly towards The Lady, resulting in the orb being volleyed between her and the Links. The Lady will volley the orb back in a much larger size, and once hit back, will shock her and knock her back. The Links can then strike her with their Swords. After enough damage, the third phase will start.

In the third phase, The Lady lowers herself down the pit she created in the second phase. She then rises wearing an elaborate dress that greatly increases her height. She will then summon colored, open parasols that slowly float around her. She will use these parasols to throw at the Links. However, when not in use, these parasols double as platforms. The Links can form a Totem to reach the floating parasols, however, only the Link whose tunic matches the parasol's color will be able to land on it. (Any Link can stand on a white parasol.) If the Link stands too long on a parasol, it will close beneath him. In order to attack The Lady, the Links must form a Totem of three and have either the bottom Link throw the middle Link onto a large parasol, or the middle Link throw the top Link onto a small parasol. The top Link can then strike The Lady with his Sword. The Links must also be careful of electricity striking the parasols. Eventually, The Lady will open the wings of her outfit as she throws the parasols to the floor, which will shock the area that they land on. The parasol platforms will eventually reappear.

After several more hits, The Lady will elevate the platform beneath her, making her even taller than before. The rotating parasols will periodically lower to the ground before returning to The Lady. This allows the Links to ride the parasols without having to throw each other. The Links can form a Totem of three and have the bottom Link step onto a parasol that matches. With their combined height, the Links can strike The Lady and finally defeat her.

Maud is an Old German feminine given name, which means "powerful battler." Maud is also the name given to grey plaids once worn by shepherds in Scotland. It also has a similar pronunciation to Mod, a 1960's British subculture and style of fashion of which Lady Maud's apparel resembles, as well as the word mode, which means "fashion, style."