Zelda Wiki
Register
Don't have an account?
Sign In
Advertisement
in: Hylians, Characters, Characters in The Wand of Gamelon 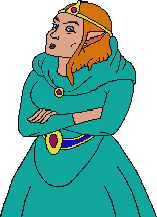 Lady Alma is a character in The Wand of Gamelon.[1] She is a woman Zelda encounters on her adventures in Gamelon.

Lady Alma is a woman who was captured by Wizzrobe and held captive in the Shutoy Lake tower.[1] Zelda and Impa learn of this through the Triforce of Wisdom, which shows Lady Alma defiantly telling Wizzrobe she is not afraid of him, resulting in him casting a spell that buries her in stones. After Zelda defeats Wizzrobe and saves Lady Alma, she learns from her that she had met Link prior during his quest in Gamelon, who had given her his Canteen in exchange for a kiss.[2] Zelda reacts in alarm, but Lady Alma neither confirms nor denies the act. She gives her the Canteen Link had lent her.

Later after Zelda defeats Ganon and saves her father from his imprisonment, Lady Alma is present at the King's liberation. When Zelda wonders where Link went to, Lady Alma disregards him while looking at her reflection in a hand mirror. Zelda then grabs the mirror, telling her to stop looking at herself, and tosses it away. The mirror breaks and inexplicably causes Link to appear, implying that he was trapped inside. It is left unknown how Link became trapped in the mirror, nor if Lady Alma was responsible.