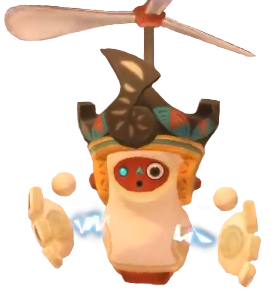 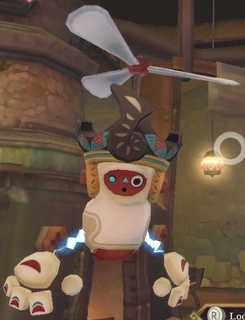 LD-301S Scrapper is a robotic character featured in Skyward Sword.[3][4] It is one of a race of Ancient Robots that are found primarily in the Lanayru Province.

Link first encounters Scrapper in the Skyloft Bazaar in Gondo's stall, but it is broken down. Gondo says that his grandfather owned and tinkered with the Ancient Robot and that it was once used to pick up and move items anywhere,[2] but that it was no longer functional.[5] Gondo's grandfather somehow knew that Scrapper could be repaired using an Ancient Flower, but Gondo had never seen one himself.[6] Link can only activate him through a series of events after he has found out that the pinwheel for a windmill on Skyloft is missing.

Gondo is able to repair Scrapper immediately after receiving the flower.[7] Scrapper does not seem to like Link because "serving children is very low in [his] task priority," and refuses to help him.[8] He changes his mind, however, when he sees Fi and is infatuated by her.[9] He claims he will do anything to please Fi and agrees to help Link because she is with him.[10] He calls Fi "Mistress Fi" and Link "Master Shortpants." He also seems to be irritated with Link for carrying Fi around, and isn't shy about expressing his dislike for him.

Scrapper can help Link carry large and heavy objects through the Sky and over the Surface. Scrapper's aid as a means of transport is required to complete many of the sidequests in Skyward Sword.

Involvement in the main quest

Once Scrapper is repaired, his first task is to aid Link in recovering the pinwheel that broke loose from one of Skyloft's windmills and fell to the Surface. The pinwheel is located on the slopes of Eldin Volcano and can be seen much earlier in the adventure, although Link cannot carry it himself. Once the pinwheel is in place, the windmill can be positioned, along with the other windmill, to activate Skyloft's Light Tower and open the way to the Isle of Songs.

The path to the Fire Sanctuary is blocked by a series of fire barriers that must be dispelled by filling receptacles resembling frogs' faces with water. The first two can be passed with a single Bottle's worth of water, but the third requires a much larger amount of water than Link can possibly carry, or that can be found in a single location anywhere on Eldin Volcano. At Fi's suggestion, Link must travel to Lake Floria and borrow the Water Basin that Faron was recuperating in earlier. Once Faron has agreed to lend Link the basin, Scrapper carries it, filled with water, although he complains that it is extremely heavy. Once Link and company reach the break in the clouds over Eldin Volcano, though, Scrapper immediately heads for what he assumes is the destination, eager to be rid of the weight. Unfortunately for Link, this happens to be the foot of the mountain. Scrapper refuses to carry the basin back up into the sky, so Link must escort him all the way up to the Fire Sanctuary entrance, defending him from monsters, whose presence on the mountain is increased during this sequence. This includes a large number of Bokoblin archers who can attack Scrapper from a significant distance away. If Scrapper takes too much damage, the sequence must be redone from the beginning. Once the company reach the entrance to the Fire Sanctuary, Scrapper hoists the basin over the carved frog mouth and simply drops it, making an immense crashing sound but also spilling in enough water to dispel the fire barrier and make the dungeon accessible.

Scrapper's final task in the main quest is to carry a massive pumpkin-shaped tureen of Pumpkin Soup, courtesy of the Lumpy Pumpkin. Levias is very fond of their soup, and given his size a massive quantity is needed. Bringing this soup to a small island in the Thunderhead with a rainbow over it summons Levias. Fortunately, Link does not need to protect Scrapper from enemies this time, nor does he need to worry about the soup becoming cold.

Dodoh is unable to open Fun Fun Island to the public because an essential tool, his Party Wheel, has fallen below the clouds.[11] The Party Wheel is located in Lanayru Desert, on a ledge. Returning the Wheel to Dodoh earns Link five Gratitude Crystals and opens Dodoh's High Dive, allowing Link to be the first to play it with one free game.

After Link talks to Levias, Sparrot no longer appears in the Bazaar. Speaking to him at his house reveals that he is unable to tell fortunes because he has broken his Crystal Ball and has no idea how he'll get a replacement.[12][13] The replacement, like the pinwheel, can be seen very early in the game, although it isn't accessible without the Clawshots. It can be found as part of the decorations on the exterior of the Earth Temple entrance. Returning the ball to Sparrot earns Link five Gratitude Crystals and causes Sparrot to resume his fortune-telling business, giving Link a discount on future services.[14]

A rare plant for Owlan

After Link learns Faron's portion of the Song of the Hero, he can talk to Owlan to discover that he fears that he has collected every form of plant life in Skyloft.[15] Link can take his request to find a new plant, which the young hero can find in the form of a Kikwi in Faron Woods. If Link shows Owlan Oolo the Kikwi, he will become ecstatic at the young hero's find and reward him with five Gratitude Crystals.[16]

A farmhand for Kina

Once Link has the Song of the Hero, Kina, one of the owners of the Lumpy Pumpkin remarks that plowing the field is tiresome, and that she wishes that there were someone who was good at digging to help around in the field.[17] If Link revisits the subterranean tunnels of Eldin Volcano, he will find Guld situated on top of one of the rock pillars, which can only be reached while Link is diving into the area. Guld will comment that the heat is making him unable to find any treasure, and that he would like to have a job in a cooler climate.[18] Link tells the old Mogma that he knows a place, and Fi calls down Scrapper to transport Guld to Pumpkin Landing. Upon reaching Pumpkin Landing, Guld will be disappointed at first that Link is trying to get him to work in the field.[19] Fortunately, the Mogma becomes more content with the situation, after displaying his digging skills to Kina. As a reward, five Gratitude Crystals form because of Kina's gratitude for Guld's coming to help work in the fields. At night, Guld reveals that he believes Kina is "falling for him" and "eying him".[20]