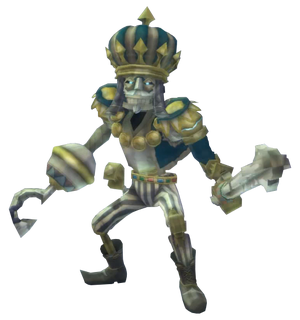 LD-003D Dreadfuse is a mini-boss in Skyward Sword,[1] appearing inside the Sky Keep. It bears a close resemblance to LD-002G Scervo and is a similar model.[2]

Upon Dreadfuse's defeat, metal bars across the bridge's gap will lift up to reveal a Clawshot target and a Treasure Chest containing a Small Key inside. The same Small Key that is used to open the door leading to the Triforce of Courage.

Dreadfuse's name is a portmanteau of "dread" and "dead fuse."