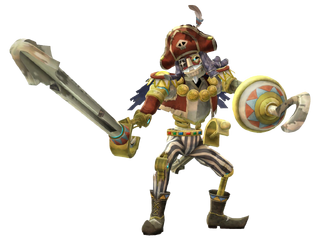 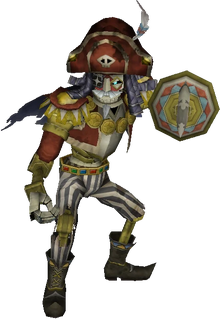 Scervo is a formidable pirate captain who once commanded a crew of pirates.[3] He uses a drill which acts like a sword that sparks with electricity. Many years ago, Scervo had usurped the Sandship from Skipper, and still has it under his command.[4] It is also implied by Fi that Scervo once served Skipper before mutinying from him.[1] Link encounters Scervo on the Sandship and must fight him.

The battle is based on a ring-out endurance, and has three rounds. Behind Link is a spike-equipped wall that will hurt him upon contact. Behind Scervo is a chasm that leads to the Lanayru Sand Sea. Link must attack Scervo so he can force him to retreat to the edge of the Sandship, and put him closer to the chasm. Conversely, Scervo will try to attack Link as well, and the more times he does so (particularly double attacks), the more steps he will take forwards, which Link must prevent. When Scervo is about to fall, he throws an attack that forces Link to retreat, and the spike wall will advance several steps forward, reducing the amount of space Link has to fight. When Link knocks Scervo to the edge a second time, the robot will lose his right arm, and will then start attacking with his left arm (a gold hook) by rotating his entire central body. When Link drives him close enough to the edge, the pirate captain will fall off the ship into the Sand Sea and meet his demise.

After the battle, Fi comments that she admires how it managed to function for so long, considering that this battle takes place in the present, when all the other robots (other than Scrapper) are dead.[5]

Scervo's name may be a portmanteau of the words servo, a device used in robotics for movement, and scurvy, a common disease among pirates and other seafarers.