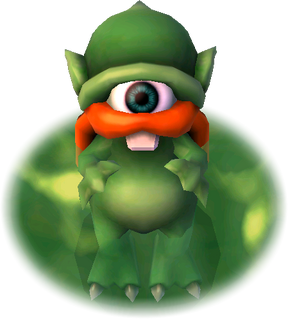 Sword
Ice Rod
Ku are recurring Enemies in The Legend of Zelda series.[1] They are the Dark World and Lorule counterparts of the Zora.

In A Link to the Past, like Zoras, Ku pop up out of whirlpools to jettison a single fireball at Link before disappearing under the water again. Unlike Zoras, they do not appear to have a king or leader of any kind, although they do share some similarities with the Catfish that lives in the Lake of Ill Omen. Ku are common in the waters of the Dark World, with most appearing at the Lake of Ill Omen, the Ice Lake and even the Swamp of Evil where they share their home with Swamola. It is possible that they use Whirlpool Warps to travel around the Dark World much as the Zoras do, but there is only one of these warps in the Dark World.

Ku reappear in A Link Between Worlds, this time as inhabitants of Lorule. They can also appear on land, revealing their full bodies. They have webbed feet and a turtle-like shell, resembling a Kappa, an aquatic demon of Japanese folklore. They will charge at Link, running swiftly on land. This type of Ku can be found in the Treacherous Tower and Ku's Domain, a large waterfall found in the northeast of Lorule where Ku gather. If Link defeats all the Ku at Ku's Domain, he will obtain a Silver Rupee. The Ku in the Treacherous Tower appear in puffs of purple smoke.