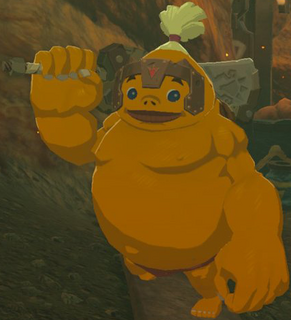 Krane is a character in Breath of the Wild.[1]

Krane is a Goron who stands watch at the western entrance to Goron City. He wears a Forehead Protector and carries a Cobble Crusher.

When Krane first meets with Link, he greets him as "Master Link."[2] If Link asks how he knew who he was, Krane appears confused, before he expresses his hope that Link made it past the Magma Bombs without injury.[3] He admits that not many tourists have visited Goron City since the Magma Bombs started falling, so he has been addressing guests as the Hylian Champion to pass the time.[4] He explains that Link was the name of the Hylian who fought alongside the Goron Champion, Daruk.[5] Krane directs Link to Bludo if he wants to know more.[6]

Krane then asks what has brought Link to Goron City.[7] If Link speaks to him again and answers that he is visiting for a different reason, Krane will notice the change and become confused.[8][9][10]

When told that Link is there for a Divine Beast, Krane admits that he does not know much about that.[11] He believes that Bludo would know something about it.[12] The next time Link tells him that he is there for a Divine Beast, will mishear him as saying he is there for a "diving feast," which he does not know about.[13] However, he adds that Bludo has been driving away a lizard monster with his Cannons, referring to the Divine Beast Vah Rudania.[14] He tells Link that Bludo lives in the deepest part of town.[15] If Link gives this answer to Krane after calming Divine Beast Vah Rudania, Krane complains that it so much chaos.[16] He is grateful that Yunobo was able to bring peace back to Goron City.[17]

Next, if Link says that he is there for pleasure, Krane says that he reasons do not matter and welcomes him to Goron City.[18] Due to the Scorching Climate surrounding the City, Krane has not seen many Hylians as of late.[19] He considers it their loss, though, and he encourages Link to enjoy his visit.[20] If Link tells Krane a second time that he is there for pleasure, Krane wonders whether he is equipped for the heat.[21] He informs Link that there are goods in Goron City that could help him adjust, such as Fireproof Armor from Ripped and Shredded or Fireproof Elixirs.[22]

Finally, Link can tell Krane that he is in Goron City for business, which causes Krane to recall that it used to be easy to find Gems in town, even though the Gorons find them disgusting.[23] Though it sounds outlandish to him, Krane shares that there are people who buy them for high prices.[24] In fact, he claims that it is the main source of income for Goron City.[25] If Link again tells Krane that he is there for business, Krane shares that he heard there are many valuable Gems on Death Mountain.[26] Since no one goes there anymore, Krane believes that anyone who goes there to dig up Gems would not face much competition.[27]

Krane is a reference to the Crane (machine), which is utilized in construction.