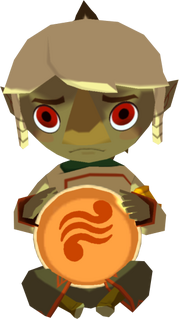 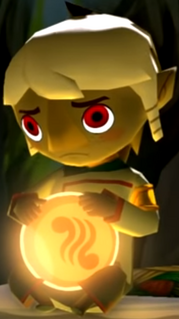 Komali,[2] also known as Prince Komali,[3] is a character in The Wind Waker.

Komali is a Rito and the son of the Rito Chieftain. He lives in Dragon Roost Island and is destined to be the future leader of the Rito. He is also close friends with Medli and is the holder of Din's Pearl. Komali is known to be rather shy with very little confidence in himself. As such, his grandmother was always with him, giving him the strength and courage that he needed as well as comforting him in his time of need.[4] His grandmother, having received Din's Pearl from the sky spirit known as Valoo, gave the precious gem to her grandson as a gift.[5] However, due to unknown reasons, Komali's grandmother passed away not long before Link arrived on Dragon Roost Island.[6] Soon after, Valoo begins to go on a rampage, thus preventing Komali from reaching him to receive the scale that allows him to grow his wings. Overwhelmed by all these events, Komali shuts himself out from the rest of the world and refuses to visit the Sky Spirit for his scale.[7][8] It is then that Link meets Komali's father, who asks him to share some of his courage to his son as well as delivering a letter of encouragement written by the chieftain.[9]

When Link meets Komali, he treats him with a cold and negative attitude, still unwilling to listen to any voice of comfort that anyone tries to give him.[10] He is rather reluctant to listen to anything that Link has to say, calling him a liar for saying that he could calm Valoo down.[11] However, Komali does mention that if Link finds someone that can get past all the obstacles on Dragon Roost to get to Valoo, then he will hear whatever words he has to say. The prince also refuses to give Din's Pearl to Link, explaining that the pearl is the only thing that calms him down.[12]

After Link defeats Gohma and relieves Valoo of his pain, Komali is finally able to receive his wings again. Komali, impressed by Link's courage, decides to bestow upon him Din's Pearl, saying that giving away what he values the most will give him the courage he needs.[13] Komali promptly departs to receive the scale from Valoo in order to obtain his pair of wings, abruptly saying goodbye to Link.[14]

Komali and Quill make a rather opportune appearance just as Ganondorf is ready to abolish Link and Tetra in the Forsaken Fortress. The two Rito quickly fly through the viewing platform and take Link and Tetra away by grabbing them with their talons, saving them just before Valoo engulfs Ganondorf's tower in flames.

Komali can be seen again shortly after Medli is awakened as the new Sage of Earth by Link. Once Medli regains her consciousness after fainting, she sees Komali flying high above where she and Link are standing, and she mentions that she only wishes for Komali to remember her as a simple attendant and not as the new Sage of Earth. As such, Link and Medli quickly leave for the Earth Temple before the Rito prince is able to notice them.[15] Komali then flies down to the cliff where Medli was earlier, only to see that she seems to have disappeared.

Link can later return to see Komali as a more mature, courageous young Rito possessing a whole different attitude than before, as well as a new wardrobe. He can be seen standing near the entrance of Dragon Roost holding a flower, where he asks Link if he has seen Medli and wonders if something has happened to her. He goes on to show Link the flower he picked for Medli, wanting to surprise her with it, but is disappointed when he notices she is gone.[16] The flower eventually wilts and Komali regrets not having had the chance to see the joy on Medli's face upon seeing the flower. Still holding the flower, Komali continues to worry about Medli's whereabouts, heavily hinting at the prince's deep affection towards Medli.[17]

Komali makes a final appearance during the ending credits. When both Link and Tetra have surfaced from the flooding Hyrule, the Rito prince flies towards them to greet them just before Tetra's Ship sails in.