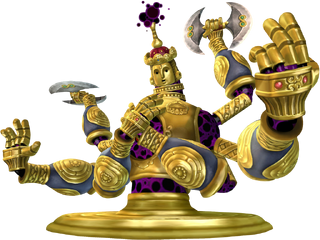 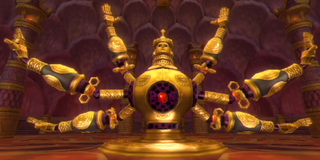 Koloktos is a Boss in Skyward Sword.[1]

As Link enters the final room of the Ancient Cistern, he immediately encounters Ghirahim inside. Ghirahim supplies the dormant Koloktos with cursed energy, giving it the mobility and the power to battle Link.

Koloktos is held together by the red cores in its arms and torso. Aware of its weakness, Koloktos covers its torso with its bottom two hands. The uppermost arms carry sharpened blades that it occasionally throws at the young hero, which he can dodge or block with his Shield. When Link is near the automaton, it tries to crush him with its giant arms. By dodging this attack and using his Whip to grab the arms' joints, Link can break off the cores from its arms. After breaking off the first two arms, Koloktos will eventually use its lower hands to attack, giving the hero a chance to either break them off as well and attack its core, or attack its core directly as Koloktos prepares the attack with its arms. Koloktos will reanimate and reattach its missing arms afterward and attack Link again.

After Koloktos has suffered enough damage, it pulls itself out of the floor and reveals its legs, giving it the ability to chase Link around the room. It also pulls out six cutlasses and cages its chest core to prevent Link from attacking it. The sentient contraption will occasionally try to attack the hero with a barrage of slashes, which he can dodge by running away. This attack can destroy the stone pillars in the room, revealing Hearts inside. It can also summon three Cursed Bokoblins which will pursue Link. After dodging an attempted strike, Link can pull the cores out of its arms as he did with its first form. He can then pick up one of Koloktos's cutlasses and use it to destroy its various parts, including its arms and legs. Link must then slice its cage apart with the cutlass, exposing the core to attack. As before, Koloktos will eventually reanimate its broken parts and reattach them.

After defeating Koloktos, its cursed energy will combust, taking the automaton with it. Link can then proceed to power up the Goddess Sword with Farore's Flame, turning it into the Goddess Longsword.

Koloktos may be derived from "koło ktoś", a Polish phrase meaning "Round One". This can refer to its round torso and orb-like red cores. Its Japanese title 魔蝕神器ダ・イルオーマ (Ma Shoku Shinki Da Iruōma), meaning "Demon-tainted Sacred Instrument: Dah Iruouma", reflects its state as being possessed by Ghirahim's demonic energy, while also being a sacred vessel or tool (i.e. an instrument) of the Goddess, used to protect the Sacred Flame of Farore hidden within the Ancient Cistern. This is also reflected in the localizations of other regions, who refer to it as a "golem" — an artificially created human being out of Hebrew legend, which is blessed with life; as a "guardian" (it was built to guard the Sacred Flame); and an "artefact" (i.e. artifact), defined as "an object (such as a tool or ornament) showing human workmanship or modification as distinguished from a natural object."[2]