Koko is a character from The Legend of Zelda: Breath of the Wild. She is a Sheikah and can be found at Kakariko Village in the West Necluda region of Hyrule. She is the older sister of Cottla and the daughter of Dorian.

Her mother was killed by the Yiga Clan. Her father had originally been a member of the clan but left it after meeting her mother and had two children. The Yiga Clan, in retaliation for betraying them, decided to attack and kill Dorian's wife. As Impa's gatekeeper, Dorian was later forced to spy for the Yiga Clan after they had threatened his daughter's lives. To spare his daughters the truth, Dorian kept the knowledge of their mother's death from his daughters, however Koko realizes the truth and knows her mother is buried in the small graveyard north of the village. Koko secretly visits the graveyard in the morning to pay her respects and grieve in secret, as she tries to stay strong to honor the memory of her late mother, though often cries showing she misses her mother deeply. If Link talks to her while she is visiting her mother's grave, she reveals that she understands that her father thinks it is best not to tell her and Cottla that her mother is gone, but that she knows and that is why she must be strong, as her sister is too young to realize it and respects her father's decision not to tell them. She also tells Link to keep her visits to the graveyard a secret from her father and sister.

As a result of this and her father's duties as one of Impa's guards, Koko often takes responsibly of taking care of her sister, as she often cooks meals for her. Link can assist Koko in cooking for her sister during the side quests "Koko's Kitchen", "Cooking with Koko", "Koko Cuisine", and "Koko's Specialty", helping her make various recipes by supplying her with the ingredients she needs. After completing all four side quests, Koko reveals that she has decided to become a chef when she grows up, but points out she will have to come up with her own recipes. As she uses the Cooking Pot of High Spirits Produce located outside, she is unable to cook when it rains and will take shelter in the Kakariko Village's inn along with her sister and laments not to be able to cook. She wonders who the Pot Lid near the cooking pot belongs to and assumes it belongs to Link if he picks it up while she is nearby. 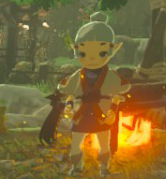 Koko by the Cooking Pot of High Spirit Produce

Koko secretly grieving her mother in the graveyard
Add a photo to this gallery
Retrieved from "https://zelda.fandom.com/wiki/Koko?oldid=544796"
Community content is available under CC-BY-SA unless otherwise noted.