Ocarina of Time
The Wind Waker

Kokiri Forest is a recurring location in the Legend of Zelda series.The word Kokiri translated from native Japanese means dense or thick fog. A sheltered forest hidden from the rest of Hyrule, it is the home of the Kokiri and their guardian, the Great Deku Tree.

Located south of Hyrule Field, Kokiri Forest can only be accessed by traveling through the Lost Woods. Its inhabitants are the child-like Kokiri and their fairies, overseen by their protector, the Great Deku Tree. Kokiri Forest is Link's hometown. He is warned against leaving because Kokiri believe they will meet sudden death upon exiting the forest. Oddly enough, however, several Kokiri are depicted at Lon Lon Ranch after Ganondorf's defeat. Saria, as well, is seen atop Death Mountain with the other Sages after this event.

Kokiri Forest contains six buildings: Link's House, Saria's House, Mido's House, the House of Twins, the Know-It-All Brothers' House, and the Kokiri Shop. It also has a training area and a stream running through it. The area is bordered by the Lost Woods to the north and east, while it is unknown what lies to the south and west. At the southernmost point of the forest is located the Great Deku Tree's Meadow.

In the early stages of the game, when Link is a child, Kokiri Forest is a peaceful place, but when he returns as an adult, the place has become overrun with Deku Babas, Mad Scrubs and Octoroks, and the Kokiri inhabitants are confined to their homes. Once Link defeats Phantom Ganon in the Forest Temple, however, Saria is awakened as the Sage of Forest, the Deku Tree Sprout is born, and the Kokiri Forest is returned to normal.

Next to the shop is a patch of Soft Soil. If Link plants a Magic Bean here as a child, he can return as an adult to ride the plant to an alcove next to the shop to find Rupees. Alternatively, he can use the Hover Boots to glide off the roofs of the houses to reach the alcove.

If Link gets the record time in racing laps around Lon Lon Ranch, Malon will reward him by giving him his own cow which will take up residence in Link's House.

Although never visited in-game, the Nintendo Gallery confirms the fact that Fado, the former Sage of Wind, was born in Kokiri Forest prior to the Great Flood.

Some people also believe that the Forbidden Woods dungeon from The Wind Waker is Kokiri Forest. While speaking to some of the various Koroks in Forest Haven when receiving the Deku Leaf from the Great Deku Tree, one of them says that the Forbidden Woods used to be their home, and that there are stump shaped houses there. These stump shaped houses resemble the houses found in Kokiri Forest in Ocarina of Time.

It is also believed that Ordon Village from The Legend of Zelda: Twilight Princess is Kokiri Forest. The village is located within an area of Hyrule known as the Ordona Province, located in south-eastern Hyrule in the canonical GameCube and Wii U versions. In Twilight Princess, the area has been settled by Humans and Hylians. Ordon Village also happens to be Link's hometown in the game.

It is equally possible that Kokiri Forest is an area of the Faron Woods that is full of poisonous fog. Its relative location is closer to that of the Kokiri Forest, and the area has a broken bridge that looks similar to the one in the Kokiri Forest. It is also closer to the Forest Temple and the Sacred Grove. However, the distance to the Forest Temple and the Sacred Grove could be just aesthetic changes due to the increased size of Hyrule in Twilight Princess as opposed to Ocarina of Time, meaning that it is equally plausible that Ordon Village is in fact the former Kokiri Forest with just a larger distance between it and the remains of the Great Deku Tree in Faron Woods. 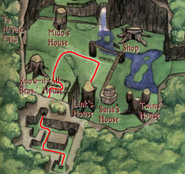 Map of Kokiri Forest, shown with the path leading to the Kokiri Sword.
Add a photo to this gallery
Retrieved from "https://zelda.fandom.com/wiki/Kokiri_Forest?oldid=543131"
Community content is available under CC-BY-SA unless otherwise noted.