The Kokiri, also known as the Kokiri Tribe,[2] and the Children of the Forest,[3] are small child-like beings that inhabit the Kokiri Forest, as they compromise the land there with planted houses on its acres and within its borders. To date, they have only appeared in Ocarina of Time and The Wind Waker, but are referenced in several games of The Legend of Zelda series.

The Kokiri were originally Hylians. When the Hylians were first developing civilization and industrialising, the Kokiri chose to live closer to nature and distanced themselves from the growing cities.[1]

The Kokiri live peacefully with Link in the Kokiri Forest, under the protection of their patron deity, the Great Deku Tree.[4][5] However, after the Great Deku Tree dies, the Kokiri Forest is overrun with monsters,[6] forcing them to retreat within their homes. Once Link returns as an adult, he rescues Saria from the Forest Temple and a new Deku Tree sprouts. The Deku Tree Sprout informs Link that he was originally raised as a Kokiri, despite his Hylian heritage, based on a poignant move by his injured mother: she placed him in the care of the Great Deku Tree during the Hyrulean Civil War before her death in order to safeguard his life from the calamity beyond.[7]

Following the Era of the Hero of Time, Fado was born and assumed the role of the Sage of Wind. As a sage, he worked with the King of Hyrule, who acted as a conductor using the Wind Waker to retain the Master Sword's power to repel evil.[8] After the Great Flood, the Kokiri adapted and took on the form of Koroks,[9] which allowed them to travel across the Great Sea with flight.

Though no Kokiri appear in Tri Force Heroes, they are alluded to with the Kokiri Clothes, a green Outfit that allows Link to shoot three Arrows at a time while using the Bow.

The Great Deku Tree grants each Kokiri a Fairy,[10] which watches over the Kokiri. Subsequently, the Kokiri utilize the Faries' abilities to their advantage, such as using them to speak across distances.[11]

Possessing a Fairy partner is considered the sign of becoming a "true Kokiri" within the forest, and many of the Kokiri congratulate Link after he obtains one and even offer to help teach him to use it.[11] Mido bullied Link because he didn't have one,[12] and still refuses to accept the young hero as one of them even after Navi has joined Link's side.[13] The Kokiri do not accept adults who have Fairies, however.[14]

The Kokiri dress in green Kokiri Tunics. The females wear headbands, while the males wear distinctive floppy green hats. They all reside within hollowed-out trees, which they use as buildings. When the Kokiri Forest is overrun with monsters, they all take refuge within the buildings. For some reason, the tops of the trees are all cut in a cone shape.

The Kokiri value their treasure, the Kokiri Sword,[15] which is hidden behind the Hole of "L" in the Forest Training Center.[16] During times where they sense danger in the forest, the Kokiri elect to arm themselves for defense, though the only Sword present is the Kokiri Sword.[17]

The Kokiri seem to be dependent on horticulture, as many farming supplies can be found within Link's house. Hay may even be found within the young hero's home, although no livestock are visibly present until after Malon gives Link a Cow. Fruits are present on Link's table within his house, so some of the Kokiri diet may be gathered rather than cultivated, though since Link is a Hylian and not a Kokiri, this may not apply. What appear to be Red Potions can be found on the top shelf of the Know-It-All Brothers' house, however.

The Kokiri maintain almost no contact with the other peoples of Hyrule, though they are known among the Hylians, who often refer to them as "forest fairies."[18]

The Kokiri use many things found in the forest in their everyday lives.[19] 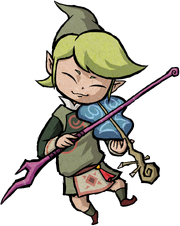 The Kokiri are an ageless race that takes the form of human children. Like Hylians, they possess long, pointed ears. Apart from Saria, all known Kokiri have either blonde or red hair. Despite their agelessness, Kokiri are still mortal beings that can be killed.[20]

Through some unknown process, the Great Deku Tree gave life to the Kokiri.[5] Given the presence of twins within Kokiri Forest,[21] it is possible that this was a biological process, rather than a magical one. Furthermore, three of the Kokiri are referred to as "brothers," though this may only be in the sense of the word rather than having any closer biological connection than any of the other Kokiri.

It was said that the Kokiri die if they leave the forest.[22] This is because the Kokiri will age in places where the Deku Tree's power does not reach. After the Deku Tree Sprout is born, the Kokiri become able to venture outside the forest safely.[23] At the end of Ocarina of Time, the Kokiri are seen in Lon Lon Ranch along with other characters celebrating Ganondorf's defeat.

When Hyrule was flooded prior to the events of The Wind Waker, the Kokiri took on the forms of Koroks,[9] which are beings made of wood, like Deku.

Saria is Link's close friend, a fact which annoys Mido. She gives Link the Fairy Ocarina before he leaves the Kokiri Forest as a parting gift.[24] After Mido blames Link for the death of the Great Deku Tree, Saria defends him.[25] When the Kokiri Forest is overrun with monsters, she leaves for the Forest Temple in an attempt to stop them.[26] There, she is awakened as the Sage of Forest and aids Link's journey to defeat Ganondorf.

Mido considers himself the "boss" of the Kokiri,[27] and often orders the other Kokiri to do menial tasks for him.[28][29] Mido regularly guards the entrance to the Great Deku Tree's Meadow, preventing others from passing unless the Great Deku Tree summons them. Saria explains that this is because the forest has become dangerous.[17] After Link defeats Queen Gohma and leaves Kokiri Forest, Mido convinces the other Kokiri that the Great Deku Tree withered because Link did something wrong to him.[25] Once Link becomes an adult, Mido protects the passageway into the Sacred Forest Meadow, only allowing passage to those who know Saria and can play her song.[30][31]

Initially, Fado is friendly and instructs Link how to look around the Kokiri Forest,[32] but later becomes angry at Link for killing the Great Deku Tree.[33] When Link returns as an adult, Fado warns Link that people who become lost in the Lost Woods become Stalfos.[34]

The Know-It-All Brothers are an intelligent group of triplets who offer to teach Link about the control mechanics and types of items.[35]

Fado is the Sage of Wind in The Wind Waker. Prior to the events of the Era of the Great Sea, Ganondorf killed him in order to weaken the Master Sword's power. Later, with Link's help, he awakens Makar as the new Wind Sage.