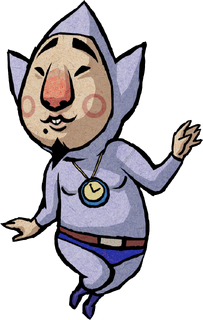 Knuckle is a recurring character in The Legend of Zelda series.[2]

In The Wind Waker, Knuckle originally left Tingle Island because he got angry at Tingle for writing "For Tingle Only" on a Sign next to Tingle Tower, which Knuckle built when he was ten years old.[3][4][1] He can only be found by using the Tingle Tuner; Link can find him by going to Outset Island and stepping into the boats on the beach. Knuckle will appear on the Game Boy Advance screen and get into an argument with Tingle, which ends with him commanding Link to visit various places on the Island.[5] After Link completes this, Knuckle gets annoyed and gives Link the Hand-Me-Down Tingle Tuner before returning to Tingle Island.[6] From then on, he stands guard rather than helping Ankle and David Jr. spin the top of the Tower.[7] Unlike Tingle, he wears blue and the mole on his face is on the right side rather than the left. In addition, the rosy patches on his cheeks aren't filled in.

In The Wind Waker HD, he appears on Tingle Island when all five of the Tingle Statues have been collected. Ankle gives Link Rupees for finding the statues instead, (50 per statue plus another 500 for finding them all) since Knuckle isn't present until they have been collected. Additionally, his Figurine is required in order to complete the Nintendo Gallery, unlike in the original version of the game. A reference to this fact was added to the description of Knuckle's figurine.[1]

Knuckle appears in Trilby Highlands in The Minish Cap, and is not accessible until Link obtains the Mole Mitts. Like the other Tingle Siblings?, he was given a Kinstone Piece by Tingle that he will Fuse with Link.[8] When Link successfully Fuses Kinstone Pieces with him,[9] the southwestern Tree in a group of four Trees in North Hyrule Field will open, leading to a room with a Switch connected to a Candlestick and a Chest containing a red Kinstone Piece. If Link Fuses Kinstone Pieces with all four of the Tingle Siblings?, the final Switch will cause a Ladder to descend, allowing Link to open a Chest containing the Magical Boomerang.