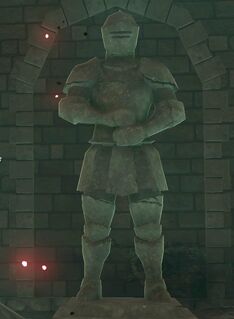 A Knight's suit of armor from Breath of the Wild

Link (Breath of the Wild)
Link's Father (Breath of the Wild)
The Knights of Hyrule,(ALttP)[1] also known as Hylian Knights,(TAoL)[2] are a recurring group of characters in The Legend of Zelda series. They are the protectors of the Royal Family of Hyrule. They played a large role in A Link to the Past, in which they fought valiantly against Ganon in the backstory;[3] and in Four Swords Adventures, in which they guarded the Royal Jewels but were cast into the Dark World and corrupted by Ganon.

The Knights of Hyrule are revealed to be a powerful clan that were descended from the legendary hero's spiritual successors who governed the crest of courage.[4][5] The knights serve the purpose to protect the Royal Family of Hyrule, the Goddess Hylia's mortal descendants for generations.[6] An incarnation of the legendary hero, Link, usually is born from the knightly bloodline[7] and often has the objective to be Princess Zelda's personal guardian.

Their symbol is the Hylian Crest used to represent the Crimson Loftwing and the sacred relic of the Golden Goddesses: the Triforce, which are also featured on the Hylian Shield, said to be used by the knights.[8]

With the history of Hyrule splitting and taking three different paths after the events of Ocarina of Time, the historical appearances of the Knights of Hyrule also splits, giving them three different destinies over the course of the three histories.

In The Adventure of Link, before the story of the Knights of Hyrule was told in A Link to the Past, two Hyrulean Knights appear to teach Link their sword techniques. One, found in Mido Town, teaches the Down Thrust and the other one, found in Darunia Town, teaches the Jump Thrust. Besides the two Knights from Mido and Darunia towns, there is also the River Man from the Water Town of Saria, who has a similar appearance to the Knights, but with darker color.

In the backstory of A Link to the Past, prior to Ganon's attempt at invading Hyrule known as the Imprisoning War, the King of Hyrule was said to have called upon the help of both the Knights of Hyrule and the Sages in an attempt to premptively stop Ganon.[11][12] This attempt failed, and before a hero was found to wield the Master Sword, Ganon began his invasion of Hyrule- thus beginning the Imprisoning War.[13][14] During the battle the Knights of Hyrule fought valiantly against Ganon's armies,[15][16] and even sacrificed themselves by using their own bodies as a shield in order to protect the Sages long enough for them to cast their seal over the Sacred Realm.[17][18] Though they were successful in their task, the family of the Knights of Hyrule were almost completely wiped out by Ganon's forces.[19][20][21][22][23][24]

After the events of the Imprisoning War a prophesy was made of a Great Cataclysm.[25][26] According to the prophesy, when a great catastrophie befalls Hyrule, a hero shall rise from the bloodline of the family of the Knights of Hyrule bearing the three crests (pendants) in order to wield the Master Sword.[27][28] During the events of A Link to the Past, Link fulfills this prophesy by collecting the three crests (pendants), drawing the Master Sword from it's pedestal, and defeating Ganon.[29][30]

In Ocarina of Time, Link, the Hero of Time, wields the legendary Master Sword and, along with the help of Zelda and the six other Sages, seals Ganon in the void of the Evil Realm,[31][32] or in the Japanese version, the "darkness beyond the realm of the dead," or "world of darkness."[33][34] In doing so, Link prevents the Imprisoning War from ever happening. It is only in the situation where the Hero of Time is defeated by Ganon that leads to the events prior to A Link to the Past.[35] With this being the case, the Knights of Hyrule have minimal mention in Ocarina of Time. Only Soldiers make on-screen appearances in this title, while the Knights are only mentioned in the item description of the Hylian Shield, where it is said to be the type of shield used by the Knights.[8] In the Hyrule Historia it is later suggested that The Hero of Time is of the family of the Knights of Hyrule.[4]

The Hylian Knights make an appearance in the beginning of Oracle of Seasons, disguised as a Troupe of Performers.[36] In the Linked Game, continuing from the events of Oracle of Ages, the troupe of performers reveal to Link that they're actually Hylian Knights. Under orders from Princess Zelda their mission is to attempt to sneak Din safely out of Holodrum into Hyrule.[37] However, they are quite easily taken out by the General Onox.

In Four Swords Adventures the Knights of Hyrule are highly esteemed throughout Hyrule for their bravery, and are said to be the pride of the kingdom because of their willingness to lay down their lives for the sake of honor.[38] Ages prior to the events of Four Swords Adventures, the Knights of Hyrule were entrusted with guarding the Four Sacred Jewels, which are needed in order to open a pathway to the Realm of the Heavens.[39]

Just prior to the events of Four Swords Adventures, the Knights of Hyrule, along with the Four Sacred Jewels, had mysteriously gone missing. Using the power of the evil Trident he had stolen from the Pyrimid within the Desert of Doubt, Ganon overtook the Knights,[40] transforming them into monstrous Big Dark Stalfos'[41][42] and cursed the Sacred Jewels into becoming portals to the Dark World.[43]

In Four Swords Adventures Link is never described as being part of the clan of the Knights of Hyrule, and seems to be unfamiliar with them.[38] Even so, Link's bravery is described as being similar to that of the Knights.[47] Coincidentally, the colors of the four Knights shown in this title (Blue, Green, Red, and Purple) correspond with the colors of the four Links that form from using the Four Sword.

The Wind Waker takes place ages after the events of Ocarina of Time, where the Hero of Time successfully sealed away Ganon with the help of Zelda and the six other Sages.[48] Echoing the events prior to A Link to the Past, Ganon eventually broke from his seal and attempted again to conquer Hyrule.[49] The people of Hyrule hoped that the Hero of Time would return to save Hyrule again, but when he never appeared, the people of Hyrule prayed to the gods to intervine.[50] As a result, Hyrule was flooded and became the Great Sea.[51]

A common spoils item found in the game is the Knight's Crest, which is said to signify a mastery of swordsmanship for its owner.[53][54][55] These crests are the "symbol of a courageous knight."[54] It is possible that swordsmen like Orca collect these crests to honor the Knights' legacy or as a symbol of courage. Collecting 10 of these crests allows Link to learn the Hurricane Spin, a move that is known to have been used by the Knights.[56]

Link, the Hero of Winds, is said to be unrelated to the Hero of Time, nor is there any indication that he is of the clan of the Knights of Hyrule.[57] Even so, when Link is able to strike Orca 100 times during sword training, Orca will claim that Link is a knight.[58] Also the Hero's Shield which is said to have been used by the Hero himself[59] was was a family heirloom.[60]

Twilight Princess takes place ages after the events of Ocarina of Time in a timeline where the Hero of Time was sent back in time and stopped Ganondorf from ever accessing the Sacred Realm,[61] and ages prior to the events in Four Swords Adventures.[62]

Like in Ocarina of Time, the Knights of Hyrule do not make a direct appearance in Twilight Princess, and are only mentioned in passing. The character Ashei says that her father was a knight in his own right, but this seems to be a reference to his martial abilities, and not meant to indicate that he was of the clan of the Knights of Hyrule.[63]

In Breath of the Wild Link was a knight and served as Princess Zelda's personal bodyguard 100 years prior to his reawakening. Link's father was said to be a member of the Knights of Hyrule.[68]

The Knights of Hyrule were equipped with the Knight's Gear equipment archetype, a set of weaponry known for its reliability and durability and which would remain in use in the wake of the the Great Calamity.[69][70][71][72]

A test in Hyrule Castle was created to judge whether or not soldiers should become a Knight by testing their strength against a Stalnox. Upon completion, the victor would be given a Hylian Shield and be recognized as a royal knight. The name of the test, "Test of the Royal Guard," suggests a connection between the Royal Guard and the Knights of Hyrule.[73]

There is also Knight equipment for Link's horse. The Knight's Bridle and Knight's Saddle are obtained from a minigame. 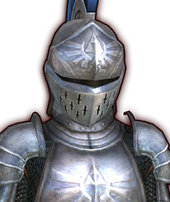 In Hyrule Warriors, Knights take the rank of Captains, which are stronger variants that take lead and take on various other roles determined by their type, as well as Generals or Commanders, which are typically much stronger Soldiers that are crucial to a Force.

Like in the game, Link is a descendant of the Knights of Hyrule in the A Link to the Past comic by Shotaro Ishinomori.[74] Because Link's parents stumbled into the Dark World, he was adopted by his uncle, who shielded him from the intrigues of the Royal Family.[75] After Agahnim kills Link's uncle, he orders that all those in the Knight's Line must be eliminated at once, including Link.[76] Other than Link and his family, it is also mentioned that Roam is a descendant of a master archer from the ranks of the Knights of Hyrule.[77] After Link defeats Ganon and restores peace to Hyrule with a wish from the Triforce, the newly-crowned Queen Zelda appoints Link as the Master of the Knights of Hyrule.[78]

The Knights of Hyrule are mentioned by Sahasrahla briefly in his telling of the events of the Imprisoning War in the A Link to the Past manga by Akira Himekawa. He describes them as "fighting valiantly against the evil..." and that many lost their lives in their heroic effort to stop evil.[79]

In the Ocarina of Time manga by Akira Himekawa, it was revealed by Rauru that Link's Father was a Knight of Hyrule who protected the Royal Family including his family, until he was killed in the Civil War, making his son, the future Hero of Time a descendant of the Hylian Knights.

In the Four Swords manga by Akira Himekawa, Link's father is a Knight of Hyrule who often has to curb his son's obstinance and tendency to rush into situations without relying on his allies. He is captured and brainwashed by Vaati, and is forced to duel his son, tricked into thinking that he is Shadow Link. He manages to break the curse himself by tossing a knife at Vaati, who had impersonated Princess Zelda. The Link from Four Swords Adventures would be the latest descendant of the Knights as well.