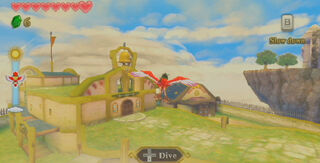 Exterior of the Knight Academy

The Knight Academy is located in Skyloft. It is there where young students live and train to become knights once they graduate.[2] Next to the academy is the Sparring Hall, where students can go to improve their Sword skills. Gaepora is the headmaster of the academy, while Owlan and Horwell are instructors. The residents of the academy include the students Link, Groose, Cawlin, Strich, Zelda, and Karane, and the graduated knight Pipit. The lunch lady Henya can also be found in the kitchen.

The main building consists of two floors, with the kitchen, restroom, academy's classroom, and male dormitories on the bottom level, while Headmaster Gaepora's office, bathroom, female dormitories, and instructors Owlan and Horwell's rooms on the second level. There is an exit on each floor, though the entrance on the first floor is locked at night, forcing Link to use the upper entrance.

Most of the rooms in the Knight Academy are accesible, with the exception of the bathroom in the upper floor at night due to the headmaster taking a bath, Headmaster Gaepora's office on occasions, and Zelda's room, although Zelda's room can be entered through the chimney outside after acquiring the Clawshots.