This article is about the Weapon in Hyrule Warriors. For similarly named Items, see here. 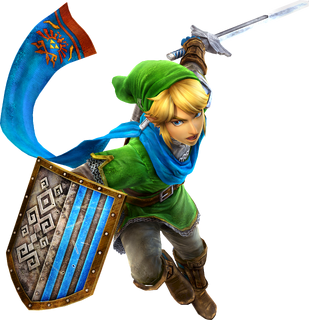 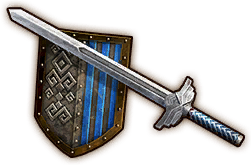 Knight's Swords are used by Soldiers and Hylian Captains of Hyrule. They come with a shield and are modified to be used by left-handed Soldiers.[3] Once a Trainee reaches the status of Soldier, they are given a Knight's Sword. In the first Scenario, "The Armies of Ruin," a horde of Enemies attacks Hyrule Castle and the Trainees are told to stay inside.[4][5] Link, a Trainee at the time, disobeys and takes a Knight's Sword to join the fight.[6][7] Link then uses the Knight's Sword to fight until either unlocking the White Sword or obtaining the Master Sword.

Knight's Swords are the base Weapon in the Hylian Sword archetype used by Link.[8] They are unlocked from the start upon starting the "The Armies of Ruin" Scenario.[9] Knight's Swords have a base attack damage of 80, increasing by 10 percent for each star in the Weapon's star rating;[10] Knight's Swords can have a range of 80, 88, 96, 104, 112, and 120 attack damage. They have a one Skill slot available (which can be increased when obtained while using a Weapon with a "Slots+" Skill), and are Light-type Weapons, meaning that the Weapon will increasingly deal more damage while repeatedly attacking a group of Enemies.[11]