"Knights of Hyrule once carried this sword. These days it's the weapon of choice for seasoned adventurers thanks to its ease of use and high attack power."
— Hyrule Compendium

The Knight's Broadsword is an item from The Legend of Zelda: Breath of the Wild. It is a sword with a base attack power of 26, though this may be increased by certain weapon bonuses. While a decent one-handed sword, it is inferior to the Royal Broadsword in both attack power and durability. It is also occasionally wielded by monsters.

It was originally used by the Knights of Hyrule before the fall of Hyrule during the Great Calamity. One hundred years later it has become the weapon of choice for seasoned adventurers since it is easy to wield and it has a high attack power. As Link himself is a Royal Knight of Hyrule, he presumably wielded them in the past before being chosen by the Master Sword.

One Knight's Broadsword spawns stuck in the ground in front of the fountain in the Central Square of Hyrule Castle Town Ruins next to a Knight's Shield, however Link must be careful as several Guardian Stalkers patrol the area. 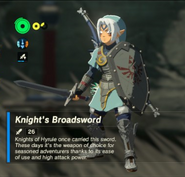 Link wielding a Knight's Broadsword in the inventory screen

Retrieved from "https://zelda.fandom.com/wiki/Knight%27s_Broadsword?oldid=524442"
Community content is available under CC-BY-SA unless otherwise noted.