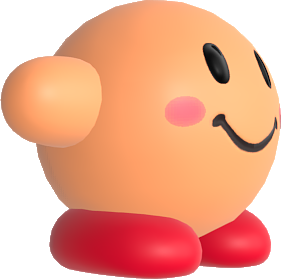 Bomb
Boomerang
Magic Rod
Kirby,(Series)[1][name reference needed] also known as Anti-Kirby,(LA)[1] is an enemy in Link's Awakening. He is the titular character Kirby of the Kirby series.[1]

Although based on the puffball hero of the eponymous series, Anti-Kirbies are hostile enemies to Link that are encountered on the first floor of Eagle's Tower. They are described as "Kirby's evil twins" in the Nintendo Player's guide of the game.[2] Like the real Kirby, these enemies attack by periodically attempting to inhale Link into their gaping mouths. If they manage to swallow Link, they will briefly hold him for a moment before spitting him back out and causing damage. While they do not inflict much damage, they are among the most resilient enemies in the game, as few items are effective against them and the Sword will merely bounce off of them. They can only be defeated with two well-placed Bombs, two hits from the Magic Rod, or four hits from the Boomerang. Unusually, Anti-Kirbies will cause more damage simply by coming into contact with one than by being swallowed.