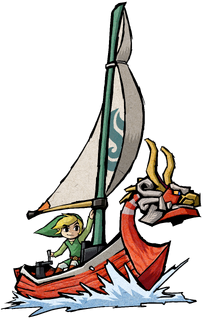 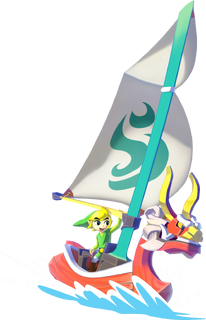 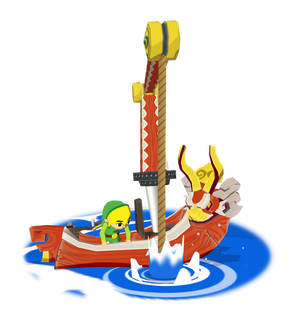 The King of Red Lions is a recurring character in The Legend of Zelda series.[3]

The King of Red Lions is a talking sailboat that Link meets after he is tossed out into the Great Sea upon being caught by the Helmaroc King in the Forsaken Fortress.[4] It is with this boat that Link is able to move from one island to another. Good-spirited and filled with wisdom, the King of Red Lions speaks to Link and explains what is currently happening and what he needs to do next.[5] He can glimpse Link's various adventures apart from him through the Pirate's Charm, which he also uses to give the hero hints.

The boat can be operated with multiple items in Link's arsenal, such as the Sail. When attached to the mast, it allows for easy sailing to the prevailing direction of the wind.[6] In The Wind Waker HD, Link can also obtain the Swift Sail from the nightly Windfall Auction at Windfall Island. The upgrade increases the boat's sailing speed and automatically changes the direction of the wind to the boat's heading. This assures full sailing speed in all directions and eliminates the need for the "Wind's Requiem" while at sea. The Grappling Hook can be used with the salvage crane to retrieve items from the bottom of the Great Sea. Bombs will give the ship a cannon to fire at enemies.

Later in the game, it is revealed that the boat is actually Daphnes Nohansen Hyrule, the king of Hyrule who lives under the sea.[7] The King of Red Lions is last seen at the end of the game, lifeless, as the King chooses to remain in Hyrule after the final battle. Link is seen departing from Outset Island in the boat to search for a new land alongside Tetra and her pirate crew.

The King of Red Lions can speak the ancient Hylian tongue, and does so on Link's behalf in conversations with Valoo and Jabun.

In Hyrule Warriors and Hyrule Warriors Legends, King Daphnes transforms into the King of Red Lions as part of his Sail Weapon's moveset, as well during his victory animation.