The King of Evil Trident appears as a giant Trident wielded by Ganon in Ganon's Fury Challenge Mode during his Boss Weak Point Smash and his Focus Spirit attack. It also appears as Ganondorf's Level 2 weapon in his Trident moveset. While a Trident is normal sized when wielded by Ganondorf, this apparently changes along with the size of its master, as it is much larger when wielded by Ganon and can be summoned via magic. Yuga can also summon the King of Evil Trident from a painting to attack as part of his Picture Frame moveset (a reference to the Trident being based on the one he used in The Legend of Zelda: A Link Between Worlds). 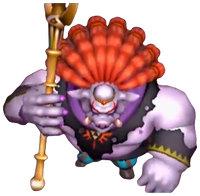 The King of Evil Trident's design is largely based on the Trident wielded by Yuga-Ganon in The Legend of Zelda: A Link Between Worlds. In the game, it is implied that the Trident originally belonged to Ganon and fell into Yuga's possession after he took over Ganon's body to obtain Hyrule's Triforce of Power. Its design resembles the Trident used by Ganon in The Legend of Zelda: A Link to the Past, differing only in color and minor differences in design. The same can also be said of its resemblance to the one wielded by Phantom Ganon from The Legend of Zelda: Ocarina of Time; this makes it the only one of the three tridents with a heavy basis on the ones wielded by Ganondorf and Ganon in the main series. 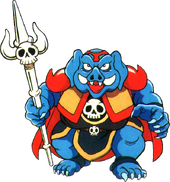 Given their similar design, it is possible is that it is the same Trident as the one wielded by Ganon in A Link to the Past. Minor differences such as color could be explained away as due to graphical differences between the two titles. Another possibility is that Yuga used his power to alter its color and design slightly to suit his taste in aesthetics, which is likely considering his personality. 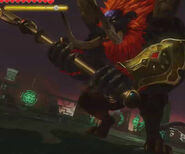 Retrieved from "https://zelda.fandom.com/wiki/King_of_Evil_Trident?oldid=544539"
Community content is available under CC-BY-SA unless otherwise noted.