King Zora XVI, also known as King Zora Do Bon XVI according to the Hyrule Historia, is a character from The Legend of Zelda: Ocarina of Time. He is the King of all the Zora in Zora's Domain and the father of Princess Ruto. Unlike many of his subjects, King Zora's build is heavy and bulky. He resides in the throne room of Zora's Domain. 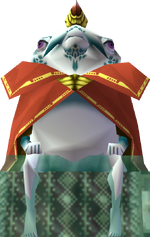 Prior to the events of Ocarina of Time, Princess Ruto was swallowed by the Zora's patron Deity, Lord Jabu-Jabu, and presumed to be missing. On his quest to gather the Spiritual Stones, Link uses his newly attained Silver Scale to dive in the waters of Lake Hylia, where he finds a bottle with a note from Princess Ruto inside. Link presents this note to the king; he refuses to believe that Ruto has been swallowed by their guardian god, but lets Link pass through his chamber to Zora's Fountain regardless. Link enters Jabu-Jabu's Belly, and inside, he finds Ruto and the Spiritual Stone of Water. Link defeats Barinade, healing Lord Jabu-Jabu and rescuing Princess Ruto from captivity. Link returns her to her father, who thanks him for his deeds.

When Link is an adult, Zora's Domain is frozen over due to the curse placed on it by the monster in the Water Temple. King Zora XVI is still found sitting on his throne, however, he is encased in Red Ice. Using Blue Fire, Link melts the ice encasing King Zora. As his reward, the king gives Link a Zora Tunic. If Link has already bought the Zora Tunic from the Zora Shop, King Zora XVI will offer Link a kiss instead. Since the Zora Tunic is not actually necessary to complete the Water Temple and can be bought in store, and Biggoron's Sword is optional as well, it is possible to complete the game without thawing King Zora.

Later, King Zora XVI plays a role in the trading quest for Biggoron's Sword, wherein Link presents him with a Prescription for the World's Finest Eye Drops, written by Biggoron. King Zora gives Link the Eyeball Frog and tells him to bring it to the Lake Scientist near Lake Hylia, so he can make Eye Drops from the frog. Apparently, Biggoron is an old friend of King Zora XVI, as speaking to him while wearing the Goron Mask will cause him to nostalgically reminisce about his childhood friend, Biggoron.

In the ending credits of the game, King Zora XVI can be seen at the celebration at Lon Lon Ranch. He is sitting in seclusion with Mido, both presumably lamenting the loss of their loved ones, Ruto and Saria respectively, while the rest of the characters are dancing and celebrating the defeat of Ganondorf.

Though King Zora XVI does not appear physically in Hyrule Warriors, his face appears on stone fountains located in the Temple of Souls. His frozen throne room appears as a keep known as the King's Hall in the Zora's Domain section of the Lake Hylia stage.

King Zora XVI is the one who gives Link the Boomerang before entering Lord Jabu-Jabu, whereas in the game the Boomerang is found inside the dungeon itself. King Zora claims the weapon has been passed down through the "Dobon" family for generations; it is likely that "Dobon" is King Zora's family name, as this is the rest of his name according to the Hyrule Historia.

Retrieved from "https://zelda.fandom.com/wiki/King_Zora_XVI?oldid=543284"
Community content is available under CC-BY-SA unless otherwise noted.