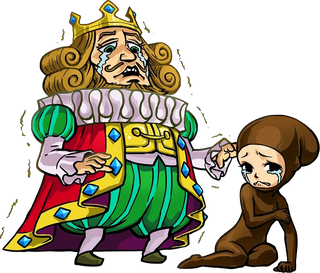 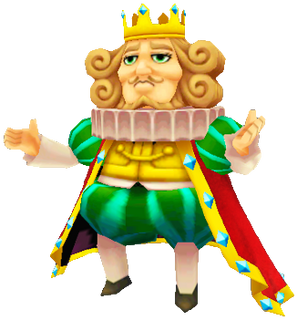 King Tuft is the monarch that presides over Hytopia in Tri Force Heroes.[3]

Prior to the events of Tri Force Heroes, King Tuft's daughter, Princess Styla, was cursed by Lady Maud to wear an irremovable tacky jumpsuit. The princess's curse had struck fear into the people of Hytopia, who started to dress less fashionably in fear they would be cursed too.[4] King Tuft agonized for his daughter and people. As only chosen heroes can enter the witch's domain, the Drablands, King Tuft issued a request to kingdoms near and far for worthy heroes, hoping they could put a stop to Lady Maud and save his daughter.[5] The king however had set strict requirements in his search for a hero: they would have to share the traits of the fabled heroes in his kingdom's prophecy, the Tri Force Heroes. The king believes that one day the Tri Force Heroes will arrive and save the kingdom,[6] and bring everlasting peace and style to Hytopia after overcoming all challenges.[7] King Tuft sought out heroes with pointed ears, long sideburns, a side-parted hairstyle, and the ability to form a Totem; all of these traits of the Tri Force Heroes. A great reward was promised to those who succeeded.[8]

Many would-be heroes came and went, until Link arrived in the kingdom and was later drafted into its Witch-Hunting Brigade. Paired with other Links, they eventually clear the Woodlands Area of the Drablands together; following which Link is summoned by King Tuft. He says that he is impressed by Link's achievements and believes him to be one of the legendary Tri Force Heroes.[9] He encourages Link to continue to conquer the Drablands and best all of its Drablands Challenges to become a true Tri Force Hero.[10]

After the Links defeat Lady Maud and craft the Lady's Ensemble, whose power can lift Princess Styla's curse, Link leaves for the castle to see King Tuft and Styla. King Tuft, having been informed by Madame Couture of the Outfit and her relation with Lady Maud prior, is assured he will not have to press serious charges on Lady Maud.[12] He tells Link to use the Outfit's power right away. Link lifts the curse from Styla, returning her to normal. King Tuft is overjoyed and grateful to see his daughter returned to her former self. He holds a big celebration in town to celebrate and personally invites Link as a royal decree. During the celebration, he lifts Link onto his shoulders, and is then lifted by Sir Combsly, forming a Totem.

After the celebration ends, King Tuft sends a letter to Link requesting that he come visit for his promised reward. Upon visiting him, King Tuft gives him Princess Styla's Cursed Tights as his reward, regarding it as a collector's item. He encourages Link to continue to conquer the Drablands' challenges.

Tuft refers to a cluster of threads weaved through fabrics while knitting. It can also refer to a tuft of hair, referencing King Tuft's hairstyle.