Zelda Wiki
Register
Don't have an account?
Sign In
Advertisement
in: Objects, Books, Objects in Breath of the Wild 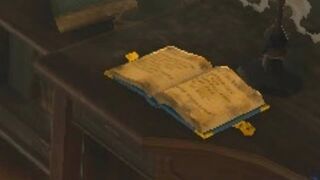 Hyrule Castle
King Rhoam's Journal is an Object in Breath of the Wild.[1]

King Rhoam's Journal is a Book that was used by King Rhoam to document his personal thoughts regarding Princess Zelda's training to awaken her sealing powers and his anxieties over the impending Great Calamity. The journal can be found in the King's Study in Hyrule Castle.

The first page of the journal tells about the birth of King Rhoam's daughter that he, wishing to continue the Royal Family's tradition, bestows the name Zelda.[2] King Rhoam also states that this was a good time to pen his thoughts into this Journal, despite being foreign to the idea.[3]

The second page reports of King Rhoam's realization that the predictions made by the Fortune-Teller were starting to becoming reality as more and more of the ancient Sheikah artifacts were being unearthed, and that he must hasten to fully understand the utility of these relics to use them against Calamity Ganon.[4] King Rhoam also notes Zelda's strong interest in the Sheikah technology.[5]

The third page tells of the sudden death of King Rhoam's beloved wife, his lamentations leading to sleepless nights,[6] and the realization that he must raise and tutor Zelda alone.[7] A 6-year old Zelda is mentioned and her lack of negative emotions regarding her mother's death, being a result of her training to remain a stoic princess.[8]

King Rhoam expresses unease at the lack of Zelda's progress on the fourth page. He believes that Zelda is now succumbing to her pent-up emotions due to her mother's passing, which is hindering her chance to awaken her sealing power.[9] If it was not for Calamity Ganon's inevitable re-awakening, he would have eased up on Zelda.[10] King Rhoam states that has no choice but to keep being stern and push Zelda to train harder, even if it means jeopardizing the father-daughter relationship between them.[11]

The fifth page details King Rhoam's side of the "Father and Daughter" memory. He is informed of Zelda watching over some of the Sheikah technology research on her day off. Believing that her undying interest in studying the relics is what's keeping her from awakening her sealing power, King Rhoam furiously demands that she stops getting involved with the research.[12]

King Rhoam documents his concern for Zelda on the sixth page. He writes that he is aware of Zelda's overwhelming emotions due to the ten years of training that turned up fruitless, being talked about behind her back, being scolded at by her father who is the only family she has, and the sorrow and grief of losing her mother whom she could have learned from.[13] King Rhoam pens that he wishes he could make amends and comfort her just once, but he knows that seeing that Zelda unlocks her sealing power is the upmost priority in order to overcome Calamity Ganon.[14]

In the seventh and final entry in the journal, King Rhoam states that Zelda had departed for the Spring of Wisdom and that she has to awaken her sealing power or else all hope will be lost.[15] He promises that if Zelda returns without her power unlocked, then he will console her as scolding her further would accomplish nothing more.[16] King Rhoam believes that her power will awaken in some other manner.[17] He believes that the Sheikah artifacts that Zelda wanted to research would give her the one answer that he was not able to give.[18] The journal ends with King Rhoam saying that he waits not as a king, but as Zelda's father, for her to return home to him.[19]