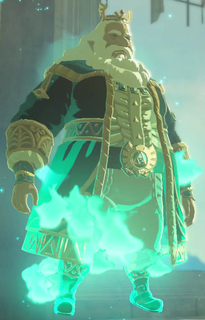 Breath of the Wild
The Last King of Hyrule[1]
Hyrule Warriors: Age of Calamity
Defier of Prophecy[2]
Your Majesty[3]

King Rhoam Bosphoramus Hyrule is a character in Breath of the Wild.[6] He is the former king of Hyrule Kingdom and the first person that Link encounters after awakening in the Shrine of Resurrection, under the guise of a simple Old Man.

King Rhoam was once the king of Hyrule Kingdom and the father of Princess Zelda, one century prior to Link's awakening in the Shrine of Resurrection. Most of the information on King Rhoam's life is detailed in his journal and in Recovered Memories. In "Father and Daughter," which occurs after Zelda returns from the Spring of Courage, King Rhoam is seen scolding his daughter after finding her observing the Guardian research. He forbids her from being involved in any more research and demands that she focus solely on unlocking her sealing powers.[7] Later, while Zelda is at the Spring of Wisdom, King Rhoam writes in his journal about the guilt he feels for being hard of his daughter and decides that when she returns from the spring she will allow her to keep researching ancient technology in hopes that the technology will help her awaken her sealing power, as the years of hard training has had no affect on her power.[8] Before he can express his guilt to his daughter, however, Calamity Ganon awakens and takes his life, as shown in "Return of Calamity Ganon" Recovered Memory.

Following Link's resurrection, King Rhoam assumes the persona of an Old Man living alone atop the Great Plateau. When Link first meets the Old Man, he is seen camping in an alcove just east of the entrance of the Shrine of Resurrection. The Old Man follows Link throughout his journey through the Great Plateau, often deflecting Link's questions into what he is doing.[9] He repeatedly exhibits a knowledge of the Sheikah Slate's capabilities as well as Sheikah culture and technology. He requests that Link bring him the Spirit Orbs from within the Ancient Shrines in exchange for his Paraglider, the means of escaping the Great Plateau.

When Link obtains all four Spirit Orbs on the Great Plateau, the Old Man will meet Link outside of the final Ancient Shrine. There, he promises to tell Link the truth about who he is, asking for Link to meet him at the spot where the four Ancient Shrines intersect before mysteriously fading away.[10] The location at the intersection of the four Ancient Shrines is the Temple of Time, where Link can pray to the Goddess Statue to receive either a Heart Container or a Stamina Vessel. Upon doing so, the Old Man will speak to Link from the rooftop of the Temple of Time, urging him meet him there.[11] Once Link enters the rooftop tower of the Temple of Time, the Old Man will congratulate him on his progress and announce that he will tell Link his true identity.[12] Here, the Old Man reveals to Link that he was King Rhoam, the leader of the former Kingdom of Hyrule Kingdom.[6] As he does so, the Old Man begins to shine brightly and assume his true form as the Last king of Hyrule Kingdom, King Rhoam.

King Rhoam informs Link that he chose not to bear his true form while Link's memories were still fragile.[13] He also shares the story of how, by the Royal Family's own folly, they brought about the destruction of the kingdom of Hyrule Kingdom at the hands of Calamity Ganon, as well as how Link came to awaken inside the Shrine of Resurrection. After hearing a prophecy of a means to combat the Calamity Ganon lying underground, King Rhoam decided to heed the prophecy.[14] Sending an excavation team comprised of members of the Sheikah clan, they carved out swaths of land looking for the prophesied means of defeating the Calamity Ganon. In doing so, they uncovered the Divine Beasts, gigantic machines intended to be piloted by warriors.[15] They also uncovered a large number of Guardians, both types of machinery having been crafted by ancient Hyruleans and told of in legend.[16] King Rhoam sought to fulfill these legends and sent his daughter and her personal knight, Princess Zelda and Link respectively, to the Sacred Ground Ruins.[17] Alongside them, King Rhoam appointed four great warriors, known as Champions, from various tribes across Hyrule Kingdom to pilot the Divine Beasts.[18] However, as the Princess and Champions were preparing to seal Calamity Ganon, Ganon infested the Divine Beasts and the Guardians with Malice, bringing them under his control.[19] In the ensuing battle to defend Hyrule Kingdom from their own technology, Link was mortally wounded. The Champions and the denizens of Hyrule Castle lost their lives as well. King Rhoam's daughter, Princess Zelda, survived and directed members of the Sheikah tribe to place Link within the Shrine of Resurrection to revive him as she went to contain Calamity Ganon alone.[20][21] The king's spirit remained to watch over Link in his hundred-year rest.

King Rhoam warns Link that Princess Zelda's power is draining and soon Calamity Ganon will escape her seal on him at Hyrule Castle and pleads for Link to save her and destroy Ganon.[22][23] To achieve this, King Rhoam suggests that Link heads to Kakariko Village to meet with Impa, the elder of the Sheikah tribe.[24] This grants Link the Main Quest "Seek Out Impa" as he magically marks the Sheikah Slate's Map and provides directions to get to Kakariko Village through the Dueling Peaks in West Necluda.[25] He then grants Link the Paraglider, fulfilling his promise to allow Link to safely leave the Great Plateau.[26][27] Having served his duty, King Rhoam tasks Link with the Main Quest "Destroy Ganon" as he bids farewell and fades away.[28]

After Link and Zelda eradicate Calamity Ganon, King Rhoam and the rest of the Champions are seen floating above Hyrule Castle bidding farewell before they take their leave for the afterlife.

King Rhoam retroactively debuted in Hyrule Warriors: Age of Calamity where he is seen readying the Hylian Army into battle and reminds Zelda to focus on her duty of awakening her powers, rather than studying the Guardians and Divine Beasts. He is also seen with a sword during the fight against their own Guardians which Ganon recruited to his side by corrupting them. He is thought to have died from the blast of Guardian lasers, but it was really Rhoam who used the device called the Ancient Guardian Shield, given to him by Zelda, to turn the tables on them and before retreating from the castle with the Royal Guard and was able to live to see another day. He is later unlocked as a playable character, where he is able to switch to his old man guise in battle to change to a different move set.