Zelda Wiki
Register
Don't have an account?
Sign In
Advertisement
in: Fairies, Kings, Characters, Characters in The Legend of Zelda TV Series 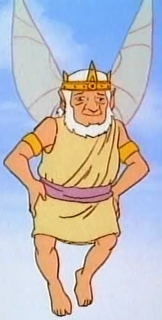 King Oberon as he appears in "Fairies in the Spring"

Spryte (daughter)
Spryte's Sister (daughter)
King Oberon is a character featured in The Legend of Zelda TV series. He is the King of Fairies and has two daughters, Spryte[2] and her sister.

King Oberon plays a minor role in the two episodes in which he appears. In "Kiss'n Tell", he is briefly mentioned by Spryte at the end of the episode, where she reveals for the first time that her father is the king of fairies and, as such, she is a princess. In "Fairies in the Spring", King Oberon is worried about how the nearly-completed Royal Water Park is draining the water supply of the Fairy Spring.[1] However, once King Harkinian explains to Oberon that they will no longer take the spring's water but instead use magic ponds, the fairy king forgives all and asks if he can visit the water park,[3] to which King Harkinian obviously permits.[4] At the water park, King Oberon is seen going down one of the slides along with Link and Zelda, and shortly after he welcomes back Spryte from her trip.[2]