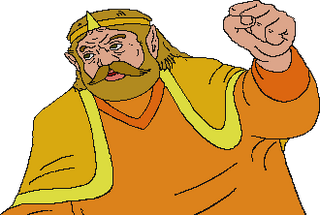 King Harkinian in The Wand of Gamelon

King Harkinian is a recurring character in The Legend of Zelda series.[1]

King Harkinian makes an appearance in The Legend of Zelda TV series. In the show, he is depicted as a tall, rotund king bearing a snow white beard and a gold crown. Personality-wise, he is a benevolent and charismatic King of the Kingdom of Hyrule, wishing to build his citizens a Royal Water Park that they can all enjoy.[2] Deeply loved by his daughter, the King seems to have trouble remembering certain things,[3][4][5] and is somewhat dimwitted. However, he is still loyal to his country and also refuses to willingly give up the Triforce of Wisdom to Ganon, even though he fears the Underworld ruler.[6]

King Harkinian often gives Link tips on wooing his daughter, Princess Zelda, such as in Sing for the Unicorn", where he tells Link to give Princess Zelda flowers in order to have a better chance of getting a kiss from her.[7] The king only appears in four episodes out of the twelve: "The White Knight", "Sing for the Unicorn", "That Sinking Feeling", and "Fairies in the Spring." In all of his episode appearances, he only plays a small role, in which two of those he gets kidnapped, prompting Link and Princess Zelda to rescue him.[8][9]

In the The Legend of Zelda comics by Valiant Comics, King Harkinian's appearance is similar to that of The Legend of Zelda TV series. He only appears in "Missing in Action" and Queen of Hearts, and plays a rather minor role. He lives in the North Palace with his daughter, Princess Zelda, and he seems to be good friends with Seline, the queen of the neighboring kingdom of Calatia.[10]

In Missing in Action, King Harkinian is the one that informs Link that Princess Zelda left Kingdom of Hyrule with the Triforce of Wisdom to keep it safe from Ganon's clutches, and he urges the young hero to find her and bring her back.[11] In Queen of Hearts, Queen Seline goes to North Palace and meets up with King Harkinian after 16 years, where the two of them spend most of the day together catching up.[12]

King Harkinian makes a short appearance in The Faces of Evil. He tells Link that he should be happier with the kingdom's peacefulness after Link complains of his boredom.[13] When Gwonam arrives to inform the King that the island of Koridai has been seized by Ganon's minions, he readily offers their help. However, Gwonam states that only Link can defeat Ganon according to a prophecy.

King Harkinian plays a large role in The Wand of Gamelon. He announces that Gamelon and its ruler, Duke Onkled, are under attack by the evil forces of Ganon and he plans to go to aid Duke Onkled.[1] Princess Zelda objects out of concern for his safety, but King Harkinian reassures her that he will take the Triforce of Courage to protect him. He orders that Link be sent if he does not return in a month. Despite Impa's Triforce of Wisdom promising that the King would safely return, he fails to do so, and Link is sent to search for him. After months of no word back from either of them, Princess Zelda decides to go to Gamelon with Impa to find them. It is later revealed that Duke Onkled betrayed King Harkinian and Ganon had him captured.[14] Princess Zelda manages to free her father after defeating Ganon, and King Harkinian orders that Duke Onkled will scrub all the floors in Kingdom of Hyrule as punishment. The group then decide to have a celebratory feast after Link appears.