King Dodongo is unique among the Giant Bosses that appear in the Hyrule Warriors series in that it has two different designs, its Hyrule Warriors design and its The Legend of Zelda: Ocarina of Time design.

Its Ocarina of Time design is based on the original King Dodongo from Ocarina of Time, though it uses the same attack and movement animation as the Hyrule Warriors version.

King Dodongo first appears in The Armies of Ruin story scenario, and is the first Giant Boss encountered in the story. It is summoned by Wizzro after the Dark Forces are decimated by the Great Fairy's Giant Super Bomb attack. During the battle, King Dodongo will crash through two keeps while on his way to attack the Hyrulean Forces base, the Castle Keep. Like King Dodongo in Ocarina of Time, Link must wait for it to open its mouth and then throw Bombs into it, in order to expose its weak point gauge, allowing Link to perform a Weak Point Smash once its weak point gauge is depleted. Link must defeat King Dodongo in order to complete The Armies of Ruin scenario.

Later, in The Water Temple story scenario, the King Dodongo from Ocarina of Time is summoned by Fake Zelda to attack the Gorons lead by Darunia and the Hyrulean Forces led by Sheik and Impa. Unlike The Armies of Ruin, however, defeating it is not required to finish the scenario.

In Ganondorf's Return, King Dodongo is one of the Giant Bosses that leads the Monster Forces in Gerudo Desert.

Two King Dodongos appear in Cia's Tale: The Dragon of the Caves, summoned by Volga and his allies to attack Cia, Wizzro, and the Dark Forces.

King Dodongo from Ocarina of Time also appears as the boss of the Monster Forces in Linkle's Tale: The Other Hero. His anger causes him to transform into Dark King Dodongo, making him far more dangerous. The power of Linkle's Compass is able to revert him back to his original form, allowing Linkle and the Hyrulean Forces to defeat him.

As part of her Summoning Gate moveset, Lana can summon miniature King Dodongos to attack enemies. 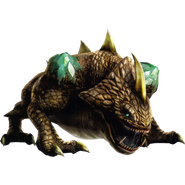 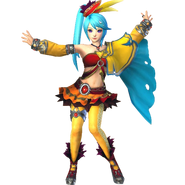 Retrieved from "https://zelda.fandom.com/wiki/King_Dodongo_(Hyrule_Warriors)?oldid=539979"
Community content is available under CC-BY-SA unless otherwise noted.