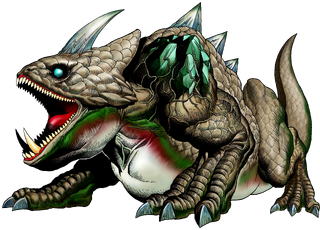 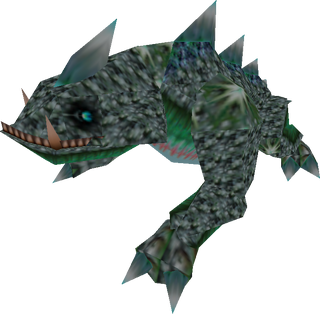 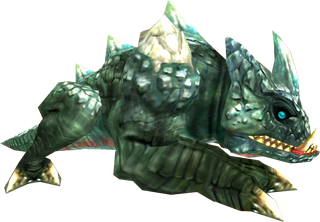 King Dodongo is the second Boss in Ocarina of Time.[3] Link must defeat King Dodongo in order to obtain the Goron's Ruby from Darunia.

To ready an attack, King Dodongo inhales air and releases a blast of damaging flame if allowed to inhale completely. During this time, Link can toss Bombs, or a nearby Bomb Flower, into its mouth. If successful, the bomb will explode inside, causing King Dodongo to collapse. King Dodongo is vulnerable to Sword attacks at this time, the Critical Point of the battle. If Link does not apply enough damage during the Critical Point, King Dodongo will rear up, curl into a ball, and roll around the arena. If Link stands close to the lava, the external walls, or hides beneath or behind the Shield, he can avoid damage. King Dodongo hits an arena wall at the end of its rampage; it unfolds and moves about until Link is close enough to target again, repeating the cycle.

When defeated, King Dodongo curls into a ball and rolls into the lava pit. The lava hardens, trapping King Dodongo, half-submerged. Link receives a Heart Container as a reward.

In Hyrule Warriors, King Dodongo appears as a giant boss that is encountered in several Legend Mode and Adventure Mode stages. In Legend Mode, it appears as a boss in the Scenarios "The Armies of Ruin", "The Water Temple", "Ganondorf's Return", "The Dragon of the Caves", and "The Other Hero". It is not required to defeat King Dodongo in all Scenarios.

King Dodongo differs from its previous incarnations as it bears golden scales, two red horns on both sides of its head, red claws, and red crystals running along its back and joints. In "The Water Temple" and "The Other Hero" it appears more closely resembling its Ocarina of Time appearance. King Dodongo attacks with a variety of moves such as curling and rolling into a ball, stomping its claws, roaring loudly, breathing a stream of flames, or by preparing a powerful fire blast by inhaling deeply. These attacks also harm nearby enemy troops. Because of its immense size, it is impervious to nearly all attacks. It becomes vulnerable when Bombs are thrown down its throat as it sucks in air, which stuns it and exposes its weak point gauge.

King Dodongo may drop its Claws as a silver Material or its Crystal as a gold Material when defeated.