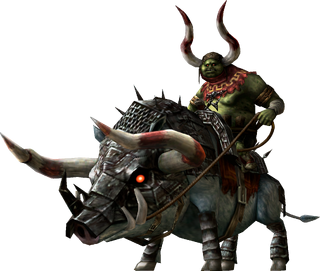 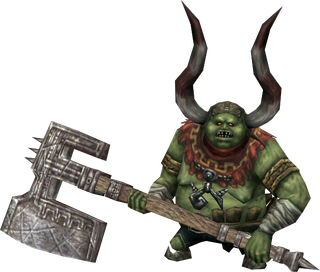 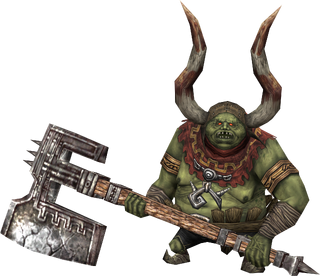 King Bulblin is a recurring boss in Twilight Princess.[2]

King Bulblin is the one who shatters the peaceful lives of Link and many of the Ordonians by invading the Ordon Spring to clear the way for a Twilight Portal. King Bulblin kidnaps the children of Ordon Village, but they manage to escape to Kakariko Village. He later kidnaps Colin from Kakariko and escapes to the center of the Eldin Province, with Link and Epona in hot pursuit. Link must chase after him and slash off his armor while King Bulblin's Bulblin legions chase him on Bullbos. After all of his armor is gone, the king retreats to the Bridge of Eldin, where he rides Lord Bullbo against Link in a joust of sorts. Link must gallop toward him on Epona, move to one side at the last second, and attack with his sword as they pass each other. After Link launches several successful strikes against him, King Bulblin is flung off the bridge, snapping one of his horns in half.

He is fought again at the Great Hylian Bridge. In this encounter, Link must shoot Arrows at the weak points in his armor. After Link defeats him, King Bulblin is again thrown over the side of the bridge, snapping his other horn in half; but once again, he survives.

Before Link is able to enter the Arbiter's Grounds, he engages in a duel on foot with King Bulblin in the Bulblins' base camp. He wields an enormous axe, using it to both guard himself and attack Link. Upon his defeat, he sets his tent on fire, but Link manages to escape the flames on a Bullbo.

Link fights King Bulblin one last time in the courtyard of Hyrule Castle. His only lines of dialogue are during this encounter. Before the fight, he announces "I have come to play!" and after his defeat, he concedes to Link. He gives him a key and says that he always follows the strongest side, then gallops away riding Lord Bullbo.[3] Midna is subsequently surprised that King Bulblin is actually capable of speech.[1]

In the end credits, he is seen riding around Hyrule Field on Lord Bullbo; both of his horns have grown back, which may symbolize the Bulblins being at peace with the other Hyruleans.

King Bulblin makes an appearance in Super Smash Bros. Brawl on the Bridge of Eldin Stage as a Stage hazard. He occasionally rides across the stage on Lord Bullbo and plants a Bomb on the middle of the Bridge, destroying that section of the Bridge and effectively dividing the battlefield in half. The part of the stage he destroys is eventually repaired by a Twilight portal. King Bulblin also appears as a Trophy and Sticker.

Bulblin Captains resemble King Bulblin in Hyrule Warriors. King Bulblin himself appears as an enemy in the Twilight Map in Adventure Mode. Although identical in looks to the Bulblin Captains, King Bulblin is much larger in size, speaks during battle, is more resilient to damage, and is much stronger. He appears in a powered-up state which increases his strength and endurance significantly. He can be weakened by defeating his lackeys. However, if his health is depleted to two-thirds while he is still powered-up, he will acknowledge the Warrior's strength and join their army.

King Bulblin reprises his role on the Bridge of Eldin Stage in Super Smash Bros. for Wii U.

In Super Smash Bros. Ultimate, King Bulblin reprises his role as a Stage hazard on the Bridge of Eldin Stage. He also appears as a Spirit with his steed, Lord Bullbo and has no ability.