Zelda Wiki
Register
Don't have an account?
Sign In
Advertisement
in: Locations in The Adventure of Link, Graveyards, Locations 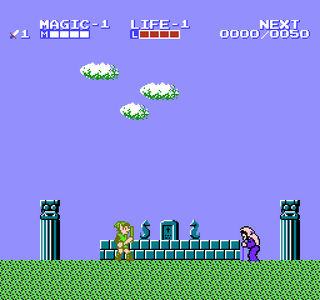 King's Tomb is a location in The Adventure of Link.[1][note 1] It is located in the Graveyard and to the southwest of the Mido Town. The King's Tomb can be easily spotted as being a lone cross in the middle of the entire Graveyard.

Error of Ruto Town tells Link of a secret tunnel to the south of King's Tomb that leads to the Island Palace.[3]

In the The Legend of Zelda comics by Valiant Comics, the Old King's Tomb is one of the many places that Link and Princess Zelda must cross to reach the Island of Hyron. After Zelda reveals to Link that she wishes to reach the Island of Hyron to obtain the Magic Flute that will warp her and the Triforce of Wisdom far away from Ganon's grasp, the young hero comments that they will have to cross through the King's Tomb on their way to the island.[4]

Graveyards in The Legend of Zelda series
Community content is available under GNU Free Documentation License unless otherwise noted.
Advertisement