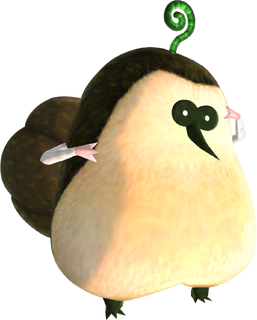 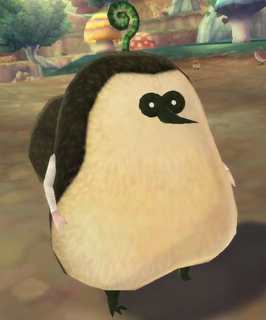 The Kikwi are a race in Skyward Sword.[1] They are small creatures that live in the Faron Woods of the Faron Province. They have plantlike material on their bodies, with which they use to camouflage themselves in their woodland habitat.

The Kikwi are small, furry creatures that are a mix between animal and plant.[2] Their bodies are a rotund, bottom-heavy pear shape, with their fur being a contrasting dark and light brown. They have short, white arms and stubby, black feet. Their faces consist of variously shaped black eyes and a short beak. On their posteriors is what looks like a bushy tail, but is actually a bud that blooms into a leafy bush under which a Kikwi can attempt to hide themselves. In addition, Kikwi also have a leafy plumage on the top of their heads resembling hair. Likewise, Kikwi can also grow facial hair, as is the case with the elders Bucha and Yerbal. The average size of a Kikwi is usually no more than half of Link's height. A notable exception to this is Bucha, who is much larger and towers over Link.

The Kikwi are herbivorous.[3] They are a peaceful race who do not resort to violence, and instead do the opposite by hiding themselves at any sign of danger. Many of them are in fact quite cowardly, even believing Link and Fi are monsters when they first meet.[4][5][6]

The Kikwi were among the five races of the Surface who joined the Goddess Hylia in the war against the evil forces of Demise. During the Sky Era, the Kikwi live in the Faron Woods. Their patriarch is the Kikwi Elder Bucha, an older and much larger Kikwi.

Shortly after Link first arrives to the forest, his Sword's Dowsing ability leads him to a pack of Bokoblins surrounding a frightened, hiding Kikwi. Link fights off the monsters, but the Kikwi runs away thinking he is one of them. The Kikwi, named Machi, relaxes once he realizes that Link is not a Bokoblin. Machi explains that he had encountered Zelda before him, who escaped with the elder Bucha as they were chased by the Bokoblins.[7] Fi hypothesizes that the Dowsing ability led Link to the Kikwi due to a false-positive caused by Machi interacting with Zelda, and believes the ability should likewise lead them to Bucha.[8] Link eventually finds Bucha, who confirms that he had indeed been with Zelda. However, Bucha is more worried about his tribe who have all gone missing during the monster panic.[9] He asks that Link find the rest of his Kikwi, and he may remember Zelda's whereabouts once he is at ease. Fi upgrades Link's Dowsing ability to search for the remaining three Kikwi, all of which are hiding somewhere around the Woods from the monsters.

After Link finds all of the missing Kikwi and reports back to Bucha, the Kikwi Elder remembers that Zelda had went into the Deep Woods, heading towards the Skyview Temple. He also rewards Link for all his help with the Kikwi heirloom, a Slingshot stored in the bud on his back.[10] Bucha lets Link take the item, saying that it will help him go further into the forest where the Temple lies.

Much later, after Link completes Farore's Silent Realm, he is led to the Great Tree where at the top he meets the Kikwi Hermit, Yerbal. Yerbal had left the other Kikwi long ago to climb the Tree and never came down, becoming a hermit.[3] Yerbal helps Link by telling him the way to Lake Floria, where the Water Dragon Faron dwells.