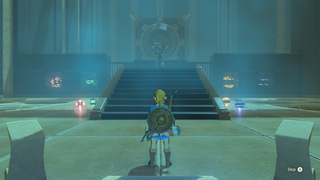 The interior of the Kihiro Moh Shrine

Naboris's Emblem
The Kihiro Moh Shrine,[1] designated by the Trial name Inside the Box,[1] is an Ancient Shrine in Breath of the Wild. It is exclusive to The Champions' Ballad DLC Pack.

The Kihiro Moh Shrine is found in the Gerudo Highlands outside of the Yiga Clan Hideout. It is one of three Ancient Shrines unlocked as part of the Main Quest "EX Champion Urbosa's Song" Main Quest.

To access the Shrine, Link must infiltrate the Yiga Clan Hideout and retrieve the Sacred Orb that the Yiga Clan stole from the Gerudo.[2] It is found on the second floor, among a pile of Mighty Bananas.[3] Link must sneak past or defeat several Yiga Blademasters to reach the Orb.

Once Link sneaks out with the Sacred Orb, he must throw it into the massive pit in the center of the arena where he fought Master Kohga. If Link loses the Orb after retrieving it, it will reappear in the final chamber of the Yiga Clan Hideout. After successfully dropping the Sacred Orb into the pit, Kihiro Moh Shrine will rise from beneath the ground nearby. Upon entering the Ancient Shrine, Link is offered the trial by the Monk, Kihiro Moh.[4]

In the Ancient Shrine are four rows of Concave Slots for Ancient Orbs. Each row is denoted by a different color. Link must place each Orb in the correct slot in the row from one to five, denoted by the amount of lights at the beginning of each row.

To find out which slot to place each Ancient Orb in, Link must count the amount of each color of sphere inside the gyroscope puzzle on the ceiling of the next room, accessed by a device in the center of the first room. There is one red sphere, two green spheres, two yellow spheres, and four purple spheres. Link must place the nearby red sphere on the first row of the red column, the green sphere on the second row of the green column, the yellow sphere in the second row of the yellow column, and the purple sphere in the fourth row of the purple column. Once Link has done so, a gate will open and allow him access to the second room and the end of the Shrine.

If Link positions the gyroscope device so that the magnetic part faces downward, he can use Magnesis to release all the Orbs from the cube. On the right side of the second room, Link will find another small Orb puzzle with three different slots labeled one, two, and three by the lights on the wall. A large metal sphere lies in a compartment in the wall above it and two metal spheres can be found inside the gyroscope device. With the slots of the puzzle being the same size as these large metal spheres, Link can place one in the slot labeled with three lights after counting a total of three spheres. After doing so, a small room will open with a Treasure Chest containing a Thunderspear.

At the end of the Ancient Shrine, Link meets the Kihiro Moh, who commends his resourcefulness and rewards him with one of Naboris's Emblem.[5] He then tells Link to collect all three of Naboris's Emblems to reveal a new challenge.[6] If this is the first of the three Shrines Link visits, the Monk tells Link that two Shrines remain.[7] If it is the second Shrine he visits, the Monk will tell him that one remains.[8] If it is the third and final Shrine he visits, the Monk will tell him to go to Divine Beast Vah Naboris.[9]