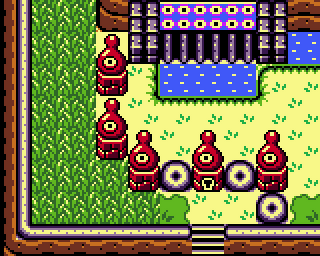 The Key Cavern is the third Dungeon in Link's Awakening.[1] The Dungeon's entrance is behind a fence of statues resembling Slime Eye, one of which has the Slime Keyhole. Despite being called a cavern, this Dungeon isn't set inside a cave, but more or less a bricked building. The Slime Key, which is possessed by Prince Richard, is required to enter. The mini-boss of this Dungeon is a pair of Dodongo Snakes, which require Bombs to defeat them. The main tool of this Dungeon is the Pegasus Boots, which is necessary to break away blocks that cannot be bombed as well as used to aid Link in defeating the Boss, Slime Eye, who guards the Sea Lily's Bell.

Entrance to the Cavern

The mini-bosses of the Dungeon are two Dodongo Snakes, which can be defeated by feeding them Bombs. Defeating these opens the way to the Treasure Chest where the Dungeon's item, the Pegasus Boots, are hidden. The Pegasus Boots allow Link to perform a running attack when combined with his Sword, which is necessary for defeating the Boss of the Dungeon, Slime Eye. This Nightmare takes the form of a giant eyeball, which hides above Link on the ceiling of the room until Link runs into the wall with the Pegasus Boots, making it fall to the floor.[4] It then must be split into two smaller eyes using the running attack before it can be hurt by conventional weapons.

When looked on the Map, the first and third floors of this Dungeon form the shape of a very large Small Key, while the second and fourth create Small Keys. The name of this Dungeon is thus named after its shape. Fittingly, there is a multitude of Small Keys in this Dungeon. There are a few rooms which require a Small Key to enter, but yield only enemies and another Small Key when explored. Also, to proceed to the top floor where the Boss room is, Link must collect four Small Keys to open four Locked Block blocking the way to the staircase. This Dungeon additionally appears to be themed on the Boss Slime Eye, as there are Slime Eye statues outside and Zols tend to live here. The Keyhole to open the Dungeon is also called the Slime Keyhole. There is also a pattern of eyes above the Dungeon's entrance, as Slime Eye is a giant eyeball in its original state. There are also more than average amounts of bombable walls and Bombites.