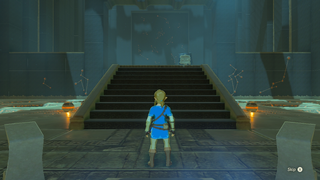 The Keo Ruug Shrine,[1] designated by the Trial name Fateful Stars,[1] is an Ancient Shrine in Breath of the Wild.

Inside the Keo Ruug Shrine, there are a series of five Concave Slots in four rows, each associated with a constellation shape. On the far wall opposite the entrance, there is a large mural depicting these constellations multiple times. A Sign near the entrance provides a hint for Link, instructing him to look to the stars for guidance.[4] This is a riddle indicating that each time a constellation appears, a corresponding hole inside one of the five pits must be filled with an Ancient Orb.

Each Concave Slot is associated with a number of constellations, with tall blue lights on each side of the sockets indicating the amount of constellations that appear. Thus, a constellation appearing only once must be placed in the socket with a single blue light adjacent to it. Once Link has properly placed each Ancient Orb, a large portcullis separating him from Keo Ruug will permanently rise, allowing Link to access the Monk.

When Link speaks to Keo Ruug, he will give him a Spirit Orb for completing the Trial.[5] Afterwards, Keo Ruug will wish Link well before fading away.[6]

A Treasure Chest is hidden in a chamber on the back side of the wall separating the front and back portions of the Shrine. A mural above it depicts another set of constellations with an alternate order that must be followed in order to release the portcullis protecting the Treasure Chest. This Treasure Chest contains a Knight's Claymore.

The order for the Ancient Orbs are as follows: