The Keaton Mask (キータンのお面,, Kitan no Omen?) is a recurring mask in the Legend of Zelda series. The mask is based on the mysterious fox-like creature known as Keaton. People's reactions to the Keaton Mask indicate that it is based on a seemingly fictional character named Keaton, who is popular with the children of Hyrule and apparently Termina at one point.

The Keaton Mask can be borrowed from the Happy Mask Shop in Hyrule Castle Town so that Link can find someone to sell it to. It is the first mask Link obtains as part of the Happy Mask side quest, and it can be sold to the Hyrulean Soldier guarding the Death Mountain Trail Starting Point in Kakariko Village for 15 Rupees, allowing Link to make a profit of five Rupees upon returning the mask's proceedings to the Happy Mask Salesman.

Interestingly, it can be borrowed again once Link has already sold it, but it serves no real purpose other than comic relief. If Link wears the Keaton Mask on the Forest Stage, the Deku Scrubs will either become aggravated and spit nuts at him until he leaves, or react positively and start dancing, showering Link with Rupees.

The Keaton Mask reappears as one of the twenty-four masks that Link can collect. Kafei wears it as a disguise, as he has gone into hiding after being turned into a child and losing his wedding mask. If Link successfully meets Kafei, the Man from the Curiosity Shop will then appear in the Backroom of the Curiosity Shop after 1 PM on the Final Day. However, in the 3DS version of the game this door opens at the dawn of the Final Day. If Link speaks to him there, he will give Link the Keaton Mask that Kafei had been wearing, as well as Kafei's letter to his mother, explaining his situation. The Curiosity Shop Owner states that he gave that mask to Kafei when he was a child, and he was surprised by how well Kafei kept it.

The Keaton Mask can be used to find Keaton in locations at which there is a ring of bushes with a single bush in the center. If Link cuts one of these bushes, the other bushes will scatter. If Link hits the bush while wearing the Keaton Mask, Keaton will appear after the bushes have vanished, and immediately recognize that Link is in disguise. However, as Keaton recognizes the goodness in Link, he offers to ask Link five random questions about people, places and animals in Termina. If Link answers all five questions correctly, he will receive a Piece of Heart. Answering all five questions on subsequent time loops will earn Link 20 Rupees.

The Keaton Mask, along with the All-Night Mask, Bunny Hood and Goron Mask, can be seen on a wall behind Carlov's counter in the Nintendo Gallery.

The Keaton Mask is featured on a sticker depicting it being worn by Kafei. The sticker grants a +10 bonus to shield recovery and can be used by any character.

Young Link wears it on his head and will even don it when the Strong Attack button is pressed with a Full Magic Meter (as Young Link's Strong Attack is normally used to turn SP into Magic).

Keaton Mask appears as Young Link's Gold Material drops. As part of the Master Wind Waker DLC, there is a Fairy Clothing Headgear option called Fox Mask which is based on the Keaton Mask worn by Young Link. However it is worn on the side of the head like how Young Link wears his Keaton Mask in the Hyrule Warriors series. In his Battle Intro cutscene, Young Link will briefly don the Keaton Mask, which will humorously fall off while Link is wielding his Kokiri Sword, causing him to briefly stare at the camera in embarrassment.

As part of the A Link Between Worlds DLC, the Keaton Mask also appears as Ravio's Gold Material drop.

Though an actual Keaton appears in Majora's Mask, this creature is never seen nor made reference to in Ocarina of Time. As a result, the meaning of its name remains a point of speculation. It is possible that the name is meant to be a reference to kitsune, the Japanese word for "fox", which also serves as the name bestowed upon mischievous foxes from Japanese folklore in English retellings.

Though an actual Keaton is seen in Majora's Mask, and the mask in Ocarina of Time is recognized as a fox by some characters, the mask may also be a reference to Pikachu from Nintendo's Pokémon series. The mask and Pikachu have similar coloration, and both are very popular among children (in the Zelda universe and the real world, respectively). Lastly, Princess Zelda misidentifies the mask as a mouse, which is the type of creature Pikachu is listed as.

The Keaton Mask is believed to be a reference to Fox McCloud, an anthropomorphic fox that serves as the main character of the Star Fox series. It is one of five masks that are a supposed reference to Star Fox, along with the Bremen Mask, the Bunny Hood, Don Gero's Mask, and the Mask of Scents.

Though Keatons are believed to native to both Hyrule and Termina, it is possible Keatons are a sentient species of fox from Termina that ended up travelling to Hyrule through the Lost Woods portal which would fit with their wisdom. In Majora's Mask it is suggested a Keaton inhabits the Lost Woods as moving grass that causes Keaton to appear in Termina when the Keaton Mask is wore can be encountered briefly in the Lost Woods section before Link chases Skull Kid through the portal that connects Hyrule to Termina however Link cannot return to this area with ghe Keaton Mask to determine if a Keaton does in fact live there (cheats that would allow Link to use the Keaton Mask there do not count as they are generally non-canon and it is likely that the Keaton was never actually programmed to appear there even if the moving grass was meant to signify a Keaton lived there as the area is normally inaccessible after Link travels to Termina). However this would also explain why Link never encounters them in Ocarina of Time as they rarely show themselves to people even in Termina.

Additionally they would have to navigate out of Lost Woods which is a natural maze which may indicate few Keaton have ever made it out into the rest of Hyrule as sightings of them may have been from travelers who entered the Lost Woods or tales of them originated from the Kokiri and/or fairies living in the woods knowledge which they eventually passed on to the Hylians which may explain Keatons popularity among Hylian children who are more likely to believe such tales and it is noted in The Legend of Zelda: Breath of the Wild that fairies sometimes befriend Hylian children and provide them with information about the world which most adults might tend to dismiss or would be highly sceptical of.

Render of the Keaton Mask from Majora's Mask 3D 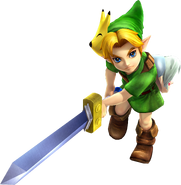 Retrieved from "https://zelda.fandom.com/wiki/Keaton_Mask?oldid=544617"
Community content is available under CC-BY-SA unless otherwise noted.