This article is about the recurring species. For information on the enemy from The Minish Cap, see Purple Keaton and Yellow Keaton. 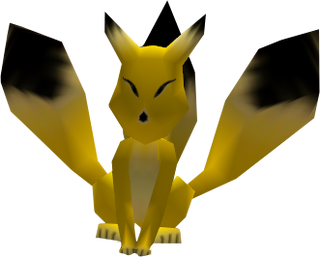 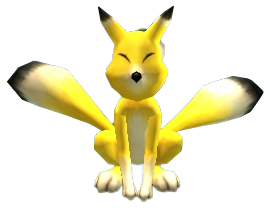 Keaton are a recurring race of fox-like creatures in The Legend of Zelda series.[1]

Keatons are three-tailed, fox-like creatures whose characteristics are derived from the mythological Japanese fox creatures, kitsune, which are nine-tailed foxes. They have yellow fur and their three tails bear black fur on the tips. Keatons are said to recognize one another by the sheen of their tails,[2] indicating subtle differences between each member.

No Keatons appear in Ocarina of Time, though a Keaton Mask can be obtained as part of a trading quest. It is the first Mask obtained from the shop in Hyrule Castle Town, and can be sold to the guard at the far end of Kakariko Village as a gift for his son. Keaton is said to be a popular character.[3]

A single Keaton appears in several locations in Majora's Mask, hiding within Moving Grass and playing tricks on people.[4] In order to draw out the Keaton, Link must cut at least one clump of Moving Grass wear the Keaton Mask a before all of the clumps have been destroyed. The Keaton will then appear and offer the Keaton's Quiz minigame, asking the young hero five questions about people and locations in Majora's Mask.[5] The Keaton appears in all locations in Termina that contain Moving Grass, such as North Clock Town, Mountain Village or along Milk Road, excluding those in the beginning Portal.

Keaton seems to be based on the Japanese word, 狐 (Kitsune). It is possible that the Japanese name, キータン (Kītan), is a combination of the first letter in Kitsune, "Ki" (き), and "-tan" (たん) a childish suffix often used for mascot characters, as would fit with the Keaton Mask.