Zelda Wiki
Register
Don't have an account?
Sign In
Advertisement
in: Locations in The Adventure of Link, Towns, Locations
English

Not to be confused with Old Kasuto. 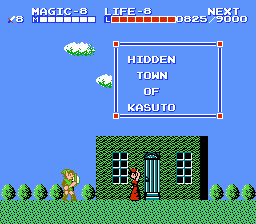 Kasuto,[1] also known as Hidden Town of Kasuto,[2] and New Kasuto,[name reference needed][note 1] is a location in The Adventure of Link.

Kasuto is found in the eastern woods of the area and is revealed upon hitting a patch of grass with the Hammer. One of the Old Women living here approaches Link and, if the young hero has three out of the four Magic Containers,[4] she will invite him inside her house to claim the fourth and last Magic Container.[5] Link can find a hint written on a wall in one of the empty houses which reveals the location of a Bowl of Hearts near the shore of Three-Eye Rock.[6]

In the second area of Kasuto is a house with its door wide open. The chimney inside the house has an entrance to it, and entering it leads Link to an Old Man who teaches him the Spell.[7] Using this new-found spell at the edge of town causes a temple to rise from the ground which houses the Magical Key.[8]