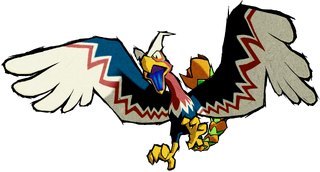 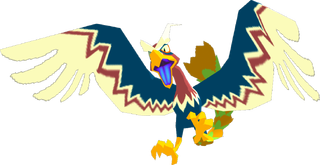 Kargarocs are used by Ganon for surveillance and transportation of other enemies such as Moblins across the Great Sea in The Wind Waker. They can be easily defeated by shooting an Arrow or Bomb from the Cannon at them. Kargarocs attack by headbutting Link. He can collect Golden Feathers from defeated Kargarocs.

Kargaroks appear in numerous locations across Hyrule Field, the City in the Sky, and Hyrule Castle's courtyard in Twilight Princess. Unlike the previous iteration of the enemy, these Kargaroks appear to be featherless and resemble cockatrices, sporting dragon-like wings and heads with turkey-like wattles. Upon sighting Link, they will swoop down and attempt to strike Link using their beaks. If Link is riding Epona, they will swoop down and attempt to knock Link off of her by use of their talons. Kargaroks can be easily dispatched with the Sword or by firing Arrows at them, Bomb Arrows being especially effective.

A friendly Kargorok is able to be summoned as Wolf Link in Lake Hylia to play Plumm's minigame, the Fruit Pop Flight Challenge. In this game, Midna rides the Kargarok while it carries Wolf Link in its talons. This Kargarok also serves as a means of transport from Lake Hylia to Upper Zora's River.

In Link's Crossbow Training, Kargaroks appear in the "The Great Bridge: Defender" Stage. In the game, they are shown to have the ability to fire rock-like projectiles from their mouths.

Kargarocs reappear in Cadence of Hyrule as enemies that move to the beat of the music. While they bear a strong resemblance to their marine counterparts in the The Wind Waker, they actually only appear in hot desert climates. Their attack pattern is identical to the Harpy from Crypt of the NecroDancer, as they can charge at either Cadence, Link, Yves, or Zelda from any direction, including diagonal, but with the added ability to jump on and off cliffs. Although their dash attacks can come close, they will always stop adjacent to the heroes before attempting to attack them. They can also only move on every other music beat, always crouching before leaping onto another tile. A stronger purple variant known as the Purple Kargaroc can be found in the Future World.

In Battle Quest, Kargaroks, or Kargoroks in PAL versions, appear as enemies in some of the attraction's various levels. They also appear as one of the 200 prizes that can be won using the coins at the game on the top of the central tower located in the middle of the plaza. Upon touching the prize in the plaza using the touch screen or simply jumping into it, Monita will comment on them.

Kargarok seems to be a misromanization, since its name is believed to come from Roc, a giant bird in Asian mythologies. This naming can be found in other bird-like creatures such as the Helmaroc King, and bird-related items like the Roc's Feather.